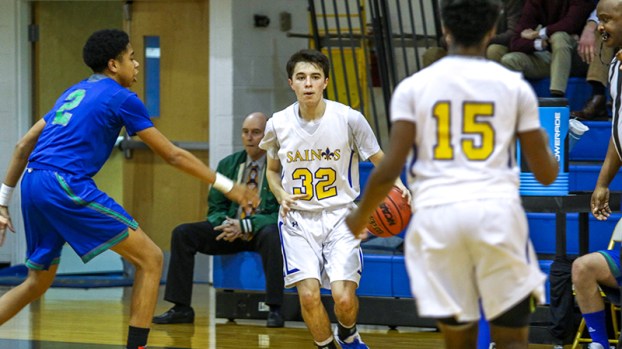 Jared Hawkins looks to make a play for the Saints. The Saints came in at No. 8 for the second consecutive week in the Virginia Independent Schools Athletic Association Division II state poll. (Jeffrey Dailey Photo)

NSA at No. 8 for second week

The Nansemond-Suffolk Academy boys’ basketball team remains at No. 8 for the second week in the Virginia Independent Schools Athletic Association Division II poll.

Last week, the first week of the poll, they had 44 total votes. They improved two votes to 46 this week. The Saints are currently 12-4 after grabbing a win over Hampton Roads Academy last weekend.

NSA has a week filled with basketball, with three games on the slate. They will take on Norfolk Academy on the road Thursday before playing in the January Jam showcase at Bishop Sullivan Catholic High School Saturday.

14 Bulldogs score in win over Hickory

It was total team effort for the Bulldogs last Friday night, as all 14 Bulldogs got on the scoreboard with... read more