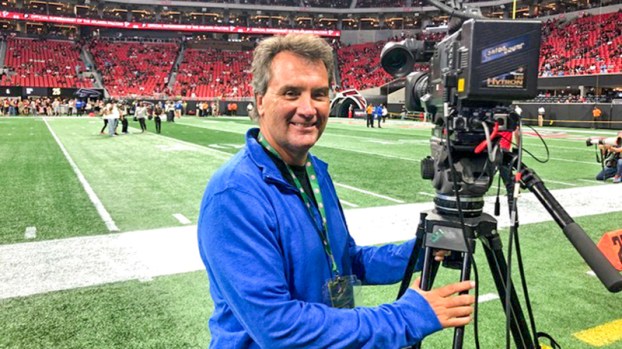 Troy Thomas is a Suffolk native with 15 years of experience working for the NFL Network. All of that will be put to the test this February when his company, Inertia Films, handles pre-and-post-game coverage of the Super Bowl in Atlanta, Ga., his company’s home turf.

“It’s going to be the biggest two-week period in the history of my company, pretty much,” Thomas said.

This will be the fourth Super Bowl the Nansemond-Suffolk Academy graduate has covered. His Atlanta-based company, which will celebrate 26 years of business this March, covers the Falcons during the NFL season.

When the New England Patriots and Los Angeles Rams go head-to-head in Mercedes-Benz Stadium on Feb. 3, it will be the third time that Atlanta has hosted the NFL’s biggest game day, and the first time since Super Bowl XXXIV in 2000.

“It’s the first time the Super Bowl has been here in 19 years, (and) people are excited,” Thomas said.

Thomas knew this was going to be a huge undertaking for his company when it was announced several years ago that Atlanta would host Super Bowl LIII. He’s been on weekly conference calls for logistical concerns. He said the area surrounding the stadium was already a madhouse on Tuesday.

He will have more than 50 crews for coverage, with five or six crews working some days and other days juggling up to 11 crews. Each one generally consists of two people for video and sound, respectively, along with a producer provided by the NFL Network, Thomas said.

Crews are responsible for either “news” or “feature” content. News crews will get live footage of team activities — at their respective hotels, at practice and elsewhere in the city — and feature crews will sit down with players and coaches for one-on-one interviews.

Since November, his company has also been shooting all sorts of clips with famous Atlanta people for the Sunday broadcast, including Larry Wayne “Chipper” Jones Jr., the Hall of Fame baseball player for the Atlanta Braves.

All of this will lead Thomas and company to a very, very long Sunday. He expects to be at the stadium around 5:30 a.m. to work for 20 or so hours.

They’ll capture roughly 11 hours’ worth of live footage leading up to the evening kickoff, and after the game, they’ll be taping interviews both on the field and outside of the locker rooms. The stories worth capturing will happen in real time, whether it’s a clutch play or a ridiculous stat line.

There are even more storylines to follow after the game, such as the game’s MVP, and that will keep Intertia Films busy long after the game clock winds down.

But Thomas trusts his team to perform on game day.

“It’s a huge deal, and it’s a big challenge for us, but we feel confident in pulling it off,” he said.

Practically every media outlet in the world will want a piece of this game, but Inertia Films is only responsible for what comes before and after. That means Thomas and his team will get to watch the Patriots and Rams like all of the other fans, whether it’s on the sidelines or in a media room with snacks.

Thomas himself is a longtime ‘49ers fan, which started around the time of quarterback John Brodie and was cemented by the likes of Joe Montana, he said. He’s also grown fond of the Falcons in the past 22 years he’s lived in Atlanta.

But his loyalty to the NFC is only one of the reasons that he’s rooting for the Rams in February. Their running back Todd Gurley, for instance, is a University of Georgia product.

Head Coach Sean McVay is the youngest coach to lead a team to the Super Bowl in history at just 32 years old. He also has the ‘49ers in his family tree. His grandfather, John McVay, is one of their former general managers.

“There’s a lot of reasons to pull for the Rams,” he said, while also admitting that seeing the Patriots lose is one of them.

The question of whether leaders are born or made was pondered at the fifth annual Dr. Martin Luther King Jr.... read more