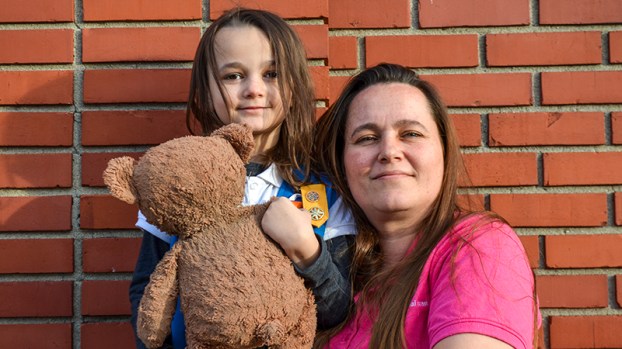 Families across Hampton Roads and the rest of the United States are struggling in the midst of the longest government shutdown in history. On Saturday, the Daisies of Girl Scout Troop 5292 in Suffolk did their part to help ease the burdens of these families.

Several Daisy Girl Scouts — from kindergarten through first grade — volunteered with their parents at the Help for Hampton Roads Coast Guard Families Food Drive that was held on Saturday at Vertical Real Estate in Chesapeake.

According to Daisy Leader Holly MacCord, the troop also donated at least a dozen bags of food. Parents and friends made their donations at Beech Grove United Methodist Church in Driver, where the troop meets.

“As the Girl Scouts tell, ‘See a need, fill a need,’” MacCord said, who was there on Saturday with her 5-year-old daughter and Daisy Girl Scout, Norah. “We saw a need, so we started to fill it.”

The girls worked non-stop to carry supplies and help fill people’s cars with whatever they needed.

“It was very uplifting to see the support of the community, especially with the young ladies from the Daisy Troop,” said Ryan Doss, spokesman for the Coast Guard Hampton Roads Chief Petty Officer Association. “It was a very heartwarming experience to have them come out, just for how excited they were to be there as part of the team.”

Holly MacCord and her husband, Mathew, had seen the shutdown hurt local families — many of which have children of their own. The troop then decided that they needed to help them through this hardship.

“It was to make sure that the families that were affected were getting the food and supplies that they needed. The Coast Guard always comes for us when they’re needed, and we wanted to make sure that somebody was coming for them,” Holly MacCord said.

As of Thursday, members of the U.S. Coast Guard and their families are still trying to live without a paycheck. That’s why several Navy wives in Hampton Roads decided to reach out on social media for support.

That led to Saturday’s astonishing turnout, with more than 100 volunteers contributing throughout the day, Doss said. Neighbors dropped off milk, eggs, meat and produce that morning to add to a massive cache of supplies, including hygiene products, baby formula, pet food and gift cards.

Teams quickly worked in the morning to unpack cars loaded with donations. Active duty Coast Guard members, civilian employees and their families came by later that afternoon to get whatever they needed.

“A lot of people never imagined that they would need to go to a foodbank. It’s an emotionally overwhelming thing to see happen,” Doss said.

Thanks to the donors and volunteers, 163 households had received assistance, which accounted for 597 people and 218 family pets. Doss said that many of those who came for food came back to volunteer themselves.

“We knew we would get some people, but I don’t think anybody imagined that we would get nearly 600 people through the doors at Vertical this past weekend,” he said. “We are thrilled by the number of people who came out.”

Another food drive will be held at Vertical Real Estate this Saturday for Coast Guard households. There will also be a concurrent food pantry at U.S. Coast Guard Base Portsmouth for all federal employees impacted by the shutdown.

Doss encouraged anyone that’s eligible to come out this Saturday, even if they don’t need the support right now.

“We don’t know when people will be paid again, so any money you can save now you can use for other things (in the future),” he said. “Please come out and let us help you.”

The Chesapeake food pantry for Coast Guard families will be open on Saturday from 10 a.m. to 4 p.m. at Vertical Real Estate, 500 S. Battlefield Blvd.

Soldier from Carrollton identified as casualty in Afghanistan

The U.S. Department of Defense announced Wednesday that a soldier who died on Tuesday as a result of injuries suffered... read more