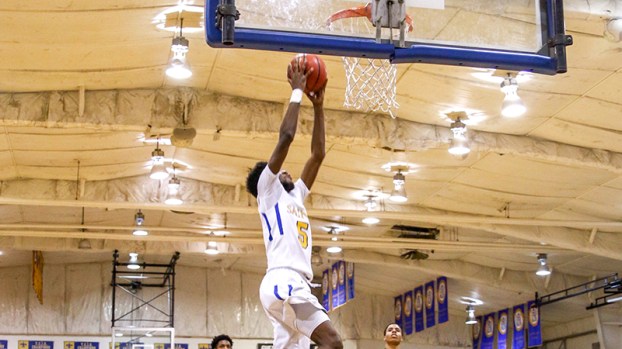 Jaden Freeman went for 14 points in a Saints win over Norfolk Academy. The Saints are now 13-5 on the season. (Jeffrey Dailey Photo)

Nansemond-Suffolk Academy improved to 13-5 on the season with the big win. NSA was able to bounce back after losing to Bishop Sullivan Tuesday night by a last-second tip-in.

The Saints are 2-2 in their last four games against some tough opponents. In the two losses, the games have been decided by a total of five points.

The game started out with NSA taking a 10-8 lead after one quarter of play. However, Norfolk was able to swing momentum back its way, outscoring NSA 12-8 in the second quarter to take a 20-18 lead going into halftime.

In the second half, a 19-point outburst in the fourth quarter help NSA secure the lead and maintain it throughout the rest of the game. Norfolk Academy’s largest lead of the game was seven, and the game featured 10 total lead changes.

Jaden Freeman and Kemauri Spencer led the way in scoring for the Saints with 14 and 13, respectively. Freeman shot 4-of-6 from the three-point line. Grant Lopez added eight points, and George Pettaway added six assists and five steals.