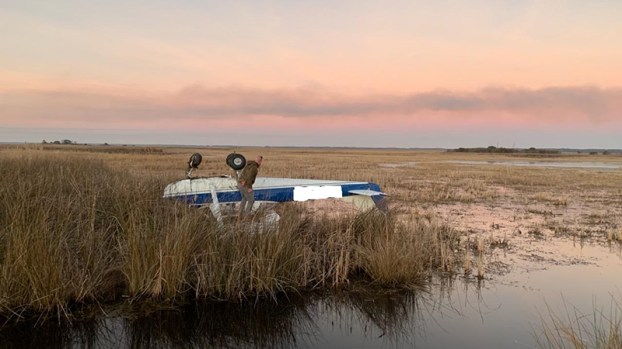 A small private plane that took off from Suffolk Executive Airport Saturday evening and crashed on Knotts Island. The plane's tail number was censored before being released to the media. (Currituck County Fire-EMS photo)

A small private plane that took off from Suffolk crashed in Currituck County Saturday evening.

Ralph Melton, fire chief for Currituck County Fire-EMS, said the plane crash was reported at 5:11 p.m. on Knotts Island. Units arrived to find the plane intact, but inverted, in the marsh off what’s known as Knight’s Point.

The pilot, who was uninjured, was able to get out of the plane on his own prior to the arrival of emergency personnel, Melton stated. Crews assisted him to get back onto dry land using a ladder.

Melton said the plane experienced mechanical trouble while flying near the island after having taken off from Suffolk Executive Airport. He did not identify the pilot.

The crash is under investigation by the North Carolina State Highway Patrol and the National Transportation Safety Board.