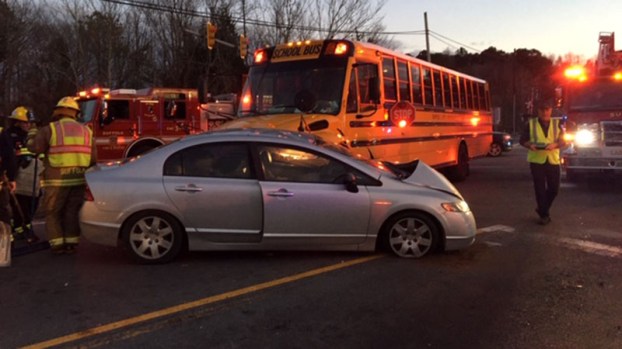 A school bus and passenger car were involved in a crash on Monday afternoon. (City of Suffolk photo)

A Suffolk Public Schools bus was involved in a crash with a passenger vehicle on Monday afternoon.

The crash happened in the 1100 block of Portsmouth Boulevard at the intersection of Nansemond Parkway. It was reported at 5:22 p.m., according to a city press release.

Preliminary investigation found the driver of a four-door Honda traveling westbound ran a red light and was T-boned by the bus, according to the release. The woman driving was taken to a local hospital with injuries not considered life-threatening. She was the only occupant of the vehicle.

The bus was carrying four students from John F. Kennedy Middle School. The students as well as the bus driver were assessed by Suffolk Fire & Rescue, but no injuries were reported, the press release stated.

Several of the parents came to the scene to pick up their children, and a secondary bus also came to continue the route.

The roadway is anticipated to remain closed until at least 7 p.m., the press release stated.

Police are seeking information from the public regarding an armed robbery at a drugstore early Sunday. The robbery was reported... read more