There were no injuries and minimal damage when a vehicle struck a Mexican restaurant on Tuesday morning. 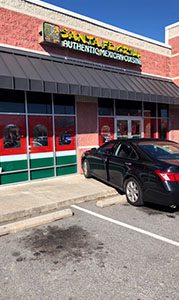 There were no injuries and minimal damage when a car struck the Santa Fe Grill on Tuesday morning. (City of Suffolk photo)

Suffolk Police and Suffolk Fire & Rescue responded at 10:42 a.m. to the Santa Fe Grill in the 1000 block of Centerbrooke Lane, according to a city press release. A Lexus passenger vehicle drove over the stop block and onto the sidewalk, striking the storefront of the eatery.

The adult female driver was issued a summons for reckless driving, according to the release.

A Suffolk Public Schools bus was involved in a crash with a passenger vehicle on Monday afternoon. The crash happened... read more