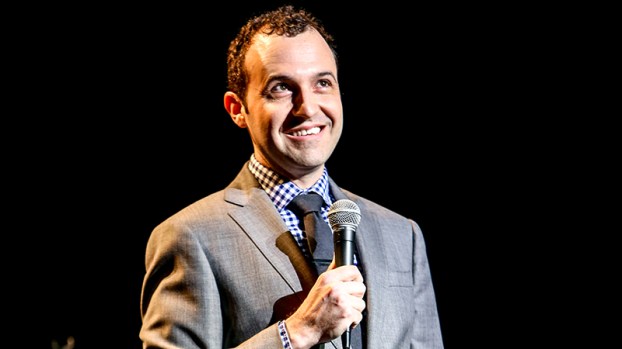 Valentine’s Day is around the corner, and tickets are still available for a night of clean, sharp comedy in North Suffolk.

This will actually feel like a homecoming for Deyo. The Virginia native grew up in Buena Vista, roughly an hour’s drive northeast of Roanoke.

“The whole weekend feels like I’m going home,” he said. He’ll perform in Roanoke the following evening after Suffolk.

Deyo made his late-night television debut on “Conan” in 2013, and within a year he followed that up with “The Late Late Show with Craig Ferguson,” “Gotham Comedy Live,” and “Comics Unleashed” with host Byron Allen.

There are numerous clips of his stand-up online, plus his album “Comedy Road Trip” was the No. 1 stand-up album on iTunes when it debuted on 2016, according to his website.

But his comedy career didn’t even get started until he was 28 years old. He had been a band director for middle and high school students in Texas for three years when he left to do what he loved.

“I had loved comedy my whole life, and I grew up in a town where people didn’t become artists, comedians or actors. I had no framework of how to make that happen. I just knew I liked it,” he said.

His quick-witted material will go into what it’s like being a new dad, his years spent in music and band and the rest of his perceptive sense of humor. His jokes will be clean and entertaining for couples and families alike.

Quincy Carr is the evening’s opening act and a local comedian who has gotten laughs out of venues nationwide since 1999. He’s a Texas native who first arrived in Hampton Roads in 1995 when he was in the U.S. Navy and stationed in Norfolk.

By 2008, he was a disabled Navy veteran and a Tidewater Community College graduate. He also went to further schooling for his first big dream — to become a barber. He oversees Cuts and Styles by Quincy Carr under his namesake company, Quincy Carr Inc.

“Barbering was my first love. I never thought I’d be an entertainer in any way,” he said. “I knew by the time I was in the fourth grade that I wanted to cut my own hair, because my dad jacked my hair up.”

It’s a passion that’s helped him write even more material.

He’s appeared on television shows like “Wicked Attractions” on the Investigation Discovery network and TruTv’s popular “Laff Mobb’s Laff Tracks.” His “Bed & Breakfast” clip from the latter has gotten more than 97,000 views on YouTube since September.

He also starred in the 2017 romantic comedy film “Employee of the Year,” and after that he got his first leading role in the national stage play “A Raisin in the Sun” by Lorraine Hansberry.

While Carr can still curse like a sailor, he learned a long time ago that there was value in writing cleaner jokes with less crassness and profanity, he said. It’s allowed him to perform in all sorts of venues like churches, college campuses and Norwegian cruise lines.

It means making people laugh without having them worry about whether or not they can share that joke with someone else, and he wants to write jokes that have substance instead of cheap blows.

“I wouldn’t want to do anything remotely bolder just for the quick laughs,” he said.

Tickets can be purchased on eventbrite.com. Visit facebook.com/Hub757 for more information.