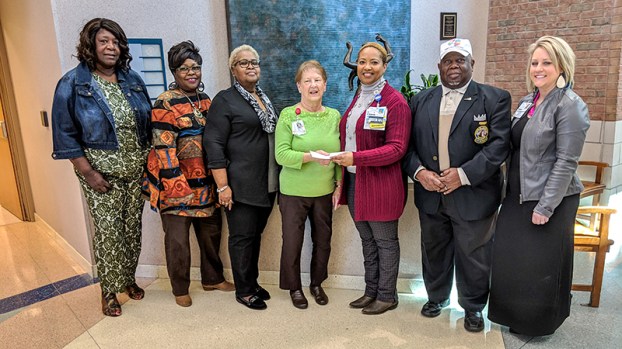 Churches donate to Nobody Fights Alone

When Sharon Daughtrey’s sister had cancer, the Sentara Obici Hospital Auxiliary’s Nobody Fights Alone program was a comfort and something to focus on outside of her grief.

The program, which receives all of its money through donations, helps cancer patients and their families pay for transportation to and from treatments and medical appointments, provides meals for the families and also helps with limited utilities support.

Members of two Suffolk churches, Metropolitan Baptist Church and Healing Chapel Baptist Church, were at the hospital Wednesday to present the auxiliary with a check for $1,800.

They raised the proceeds through their third annual Cancer Awareness Walk last October. Due to donations from local businesses, all of the money raised could go directly to the program. In the three years of the walk, they have raised $3,900.

While her sister, Michelle Faulk, died of cancer at age 56, Daughtrey remembered how much the program helped her, and she wanted to help others facing a similar ordeal.

Daughtrey organized members of Metropolitan Baptist Church, and her best friend Monica Lassiter, a member of Healing Chapel Baptist Church whose cousin Rosenna Boone died of cancer at 47, did the same at her church to help raise money for the Nobody Fights Alone program.

“I actually stumbled across this program due to a referral from the hospital,” Daughtrey said. “My sister Michelle and my best friend, her cousin Rose, were both battling cancer. We were struggling with finances, trying to get to the doctor, trying to get medicine, trying to pay the bills, the whole works. And (Nobody) Fights Alone was handing out these gift cards and seeing our struggle, so it really stuck with me.”

Daughtrey went to a cancer awareness walk in Portsmouth and got the idea to start one in Suffolk. Her sister died prior to the first walk the two churches hosted, but her friend’s cousin was able to participate in the walk’s first year.

“We started off very small and we’ve just grown and built since,” Daughtrey said. “And we’re very passionate about it.”

Lassiter said after her cousin died about a year and a half ago, it only renewed her resolve to help others.

“It gave us more initiative to keep moving,” Lassiter said. “Not only my family; I have a few members in my church who battled cancer as well. I have one who was just named cancer-free about three months ago. She has also been through this program, and it was able to help her in her time of need as well, so it’s a great cause and we’re happy to be able to assist and help keep them going.”

Suffolk City Council honed in on the need for a new downtown library during its Wednesday work session that focused... read more