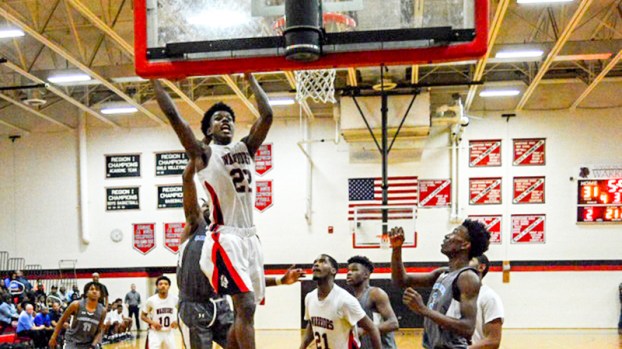 The Warriors took the season series with a win over Lakeland High School at home Tuesday night.

Nansemond River High School and Lakeland have met three times in boys’ basketball this season. All three meetings have somewhat come down to the wire. After dropping the first matchup at the King’s Fork High School holiday tournament, Nansemond River went on to win the next two matchups, including one home and away. The Warriors took the most recent Tuesday night with a 65-62 score.

The Warriors jumped out early with a 21-9 lead after the first quarter of play. It was all Lakeland in the second quarter as they closed the game significantly, going into halftime only down one, 29-28.

With only two games left in the regular season, Nansemond River felt it was important to grab this win for regional seeding purposes.

“It was important because of playoff rankings,” Rayshawn Murray said. “We as a team want to have a home playoff game, and only the top four get one. We feel like we are continuing to get better and are playing on one accord. We had people come in and produce, and it all helped our confidence.”

Nansemond River will go from one rival to another as they go on the road to take on King’s Fork. The Warriors fell to the Bulldogs in the first meeting but feel like this matchup will be critical to their playoff aspirations.

“Getting a second win this week not only for the playoffs, but they beat us the first time,” Murray said. “So, this win will definitely be a confidence booster for us.”