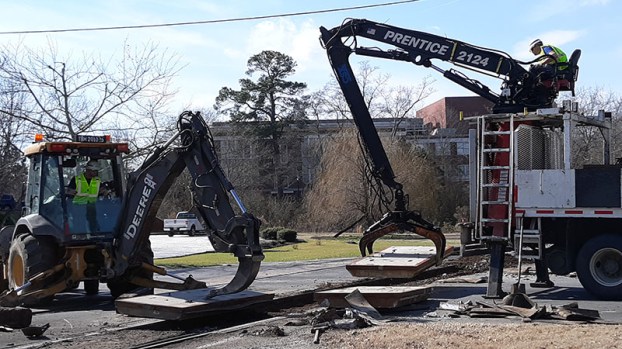 Crews work on repairing a section of railroad tracks at North Main Street on Friday afternoon.

A part of North Main Street was closed most of Friday after damage to the railroad tracks near Prentis Street was discovered.

CSX Railroad reportedly caused the damage to its own tracks with a piece of equipment, according to a city press
release. Detours were in place throughout the day as crews made repairs on the crossing. It reopened around 8 p.m.

Train signals throughout the downtown area were affected by the closure, with some crossings having lights flashing
and arms down with no train coming, city spokeswoman Diana Klink stated. Motorists were asked to use extreme caution when crossing the tracks.

The traffic havoc was compounded by an incident just down the street at the intersection of North Main Street and
Constance Road. A tractor-trailer making a turn struck a power pole near the McDonald’s, Klink stated. Dominion Energy crews were there part of the day replacing the pole, and they had some lanes closed as they did so.

The coach and members of Nansemond-Suffolk Academy’s Hexadecimal student robotics team said they were stunned to qualify for the world... read more