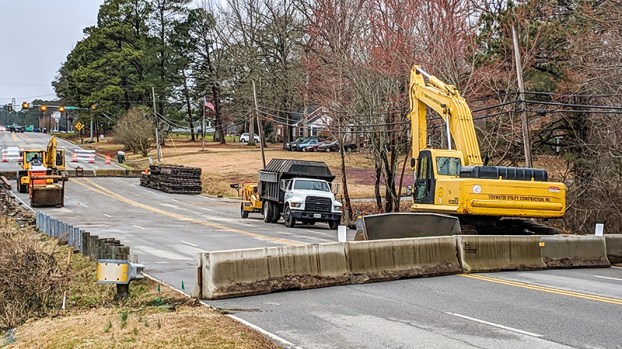 Work has begun on Pruden Boulevard between Lake Meade and Sadler Pond in Suffolk to mitigate road flooding. The work is having an impact on businesses in that area and on residents trying to drive through the area.

The area of Pruden Boulevard between Lake Meade and Sadler Pond in Suffolk will be more challenging to navigate for at least the next three months as work has begun to mitigate roadway flooding.

The 2500 block of Pruden Boulevard is closed to through traffic for 90 days, with the Route 460 bypass being used as the detour. The city said it expects the work to improve drainage along that stretch of road during extreme weather events.

Connect Hearing, which shares space with Slone Chiropractic Clinic at 2469 Pruden Boulevard, is right in the middle of the construction work.

“It has caused more traffic to turn around in our parking lot,” said Tammy England, a hearing specialist with Connect Hearing. “Folks are really just not as aware of it as they should be. We try to tell all of our patients that the road is closed.”

England, who said she has had to alter her own route to get to her business, said she has not heard any complaints about the project.

She said the business received notification from the city about the work, and that Connect Hearing has been contacting patients advising them about the project and to plan accordingly.

“No businesses will be inaccessible during this construction,” Klink said. “However, employees and patrons would need to utilize the detoured routes in order to access those locations.”

Starr Motors president Clay White said he expects the road closure to have a negative impact on the business — both financially and logistically.

“It’s going to have a huge economic impact on the ownership and the employees that we have here,” White said. “It’s going to be pretty detrimental.”

He said employees having to go from the dealership at 2584 Pruden Blvd. to its Collision Center at 2425 Pruden Blvd. are already facing challenges getting from one place to the other. White said he has also observed drivers making U-turns on Pruden Boulevard as they approach the closed portion of the road.

Though Starr Motors has posted advisories on its Facebook and web pages advising customers of the detour, he’s expecting the impact there to last through July 4.

By May 11, the city expects to partially open that section of Pruden Boulevard, with one lane in each direction to open on the four-lane stretch. That will last for about another six weeks.

Tidewater Utility Construction Corporation, which received the contract from the city to do the work, will install a double, 10-foot by 4-foot concrete box culvert about 10 to 12 feet below the bottom of the bedding stone on the highway, according to city spokeswoman Diana Klink.

Odelia Faulk Hortillosa eyed the three candles on her birthday cake that formed the number “100” at her birthday party... read more