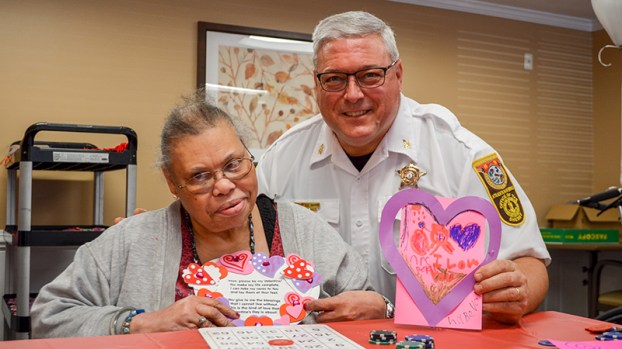 Suffolk Sheriff E.C. Harris and Autumn Care resident Carrie Richardson, 69, hold up Valentine Day cards, both the one she got at the nursing home and another she got from Elephant’s Fork Elementary School students on Thursday.

“Roses are red, violets are blue. Today I am thinking about you.” That’s what was written on one of the many Valentine’s Day cards that was delivered to residents at the Autumn Care nursing home on Thursday by the Suffolk Sheriff’s Office.

The cards were handmade by about 45 students at Elephant’s Fork Elementary School. It was a combination of the school’s Ladies of Distinction and Becoming a Man mentoring programs, plus a few others, according to Principal Jessica Avery.

Each card had color, creativity and thoughtful writing.

It’s about teaching these children how to give back to their community and care about other people and their feelings.

“It feels nice because you can make somebody feel good,” said fifth-grader Zariah Dabbs, 10. “If they’re having a bad day, you can make their day feel better.”

Autumn Care residents enjoyed the cards as more than two dozen of them played Valentine’s Day bingo and enjoyed ice cream sundaes. They played and chatted with the deputies, laughing and smiling all the while.

Resident Claxton Boone, a 70-year-old veteran of the Marines, greeted Harris like an old friend. His spirits were high and his smile was wide.

“It’s some kind of beautiful,” Boone said. “It lets us know that we’re not forgotten.”

This is the fifth year that the Sheriff’s Office has partnered with Elephant’s Fork Elementary to provide holiday cards to Autumn Care residents, and the deputies come by to cheer up the residents year-round.

“It’s an honor to have them here,” she said. “They’re part of the family now. Everybody looks forward to seeing them on the holidays (and) having a good time.”

Nansemond-Suffolk Academy students are ready to entertain this Friday and Saturday with a live performance of “Little Women,” the renowned... read more