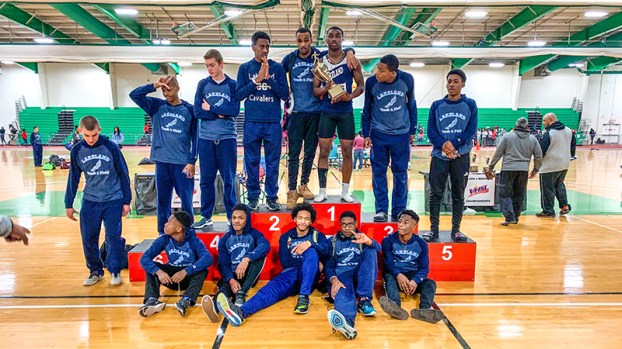 The Lakeland High School boys’ track and field team took home the Class 3 Region A title over the weekend.

Lakeland was looked at as a possible favorite coming into the meet, but the race to No. 1 didn’t come without adversity. The Cavs had to deal with multiple injuries to a couple of their top athletes. However, Coach Brian Rountree was able to make adjustments accordingly, and the Cavs went on to take home the title.

“We had to overcome a few things, but I pulled everyone together, and those guys stepped up and showed up,” Rountree said. “From the top to the bottom, they stepped up. I am extremely proud of the guys and girls.”

The Cavs had a host of first-place finishes. Jeshawn Walker took first in the 1,000-meter and 1,600-meter run. Bryce St. Louis took first in the long jump for Lakeland, with Teshun Pierre taking first in the high jump and second in the triple jump. Both of Pierre’s jumps were personal records. He jumped a 6-02 in the high jump and 44.07 in the triple jump and also took second in the 55-meter hurdles. The 4×400 relay team of Walker, Alonzo Copeland, Debreon Hill and Kavonzo Beamon took first. Also, the 4×200 relay finished third for Lakeland, giving them a solid team effort all the way around.

On the girls’ side, Kimari Rountree took home a region title in the 500-meter run. The 4×200 relay finished second.

Rountree expects the Cavs to be fully healthy rolling into the Class 3 state meet this weekend, but if not, he’s confident in others stepping up. In the outdoor season, Lakeland finished just a couple of points away from the state title. The Cavs feel good about their chance of succeeding if all things go well.

“We have been working hard all year for this time,” Rountree said. “I think the kids are ready and motivated. We are going to have a good week of practice making sure everyone is right physically and mentally, and then we’ll take the show on the road.”

The Class 3 state meet will be held this weekend at Roanoke College. Lakeland is expected to be among the favorites for the title, but regardless, Rountree feels good about what Lakeland has done.

“Regardless of what happens, these girls and these guys have worked extremely hard,” he said. “All we can do is our best and let the points add up where they may.”

After the Class 3 swim meet over the weekend, Coach Cassandra Eagan feels good about her first year with the... read more