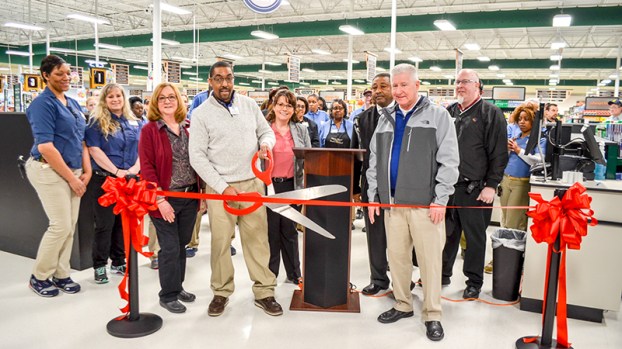 Harris Teeter celebrated the grand opening of its new North Suffolk location Wednesday morning with a ribbon cutting that was attended by city leadership and the supermarket’s community partners, as well as shoppers who came with their grocery lists in search of sales.

Suffolk resident Leigh Ann Flora, 62, said that she’s been shopping at Harris Teeter stores in Hampton Roads for more than a decade, and that she appreciated that they moved from Harbour View to Bennett’s Creek Crossing.

“This is going to be closer to my house, too, than the one in Harbour View, so I’m thrilled with that,” she said.

The new Harris Teeter is located in the Bennett’s Creek Crossing shopping center at 3675 Bridge Road, filling one of the former Hampton Roads Farm Fresh stores that Harris Teeter purchased in May. It also replaces the Marketplace at Harbour View Harris Teeter location just a few miles away.

Ty Culver, the store manager at Bennett’s Creek Crossing and also the former Harbour View location, said the new space comes with a slew of advantages, like customer traffic and visibility on Route 17.

“I think it stands out more and has easier access,” Culver said.

The new Harris Teeter is also bigger in both size and staff. According to corporate communications for Harris Teeter, the Bennett’s Creek Crossing location is 59,813 square feet, while the Harbour View location was 50,261 square feet. Culver said that staffing has also increased by about 60 associates to 142 or so total employees.

This additional space — combined with renovations — allowed for features that weren’t at the Harbour View store. These include a hot bar that serves wings and other heated food, and a peanut grinder for customers to make their own peanut butter.

There’s also a Starbucks inside the store for those that want coffee as they shop.

“When you shop at Harris Teeter, I want you to think of service,” Culver said. “I want you to think of excellence, and we will have knowledgeable and thoughtful associates to make sure that you get the service that you deserve when you choose to shop with us, and it starts today. With this new, beautiful location, we will service you with a smile.”

“Harris Teeter had a vision, and I want to thank Harris Teeter for their vision to come up here on the north end — up in the Sleepy Hole Borough — to take the place of Farm Fresh,” said Fawcett. “It’s going to be a great place to come and shop. We are so delighted to have you, (and) we are honored to have you here.”

Chelsea Moran-Lynch, director of resource development at USO of Hampton Roads and Central Virginia, explained how Harris Teeter has been a partner in their Support the Troops campaign since 2012, in which Harris Teeter customers have been able to make a $1, $3 or $5 donation to the USO in the month of May.

In 2018, $1.2 million was collected for USO centers operating in areas that have Harris Teeter stores, Moran-Lynch said.

“We want to express our deepest gratitude to Harris Teeter for their continued work.” she said.

Parker Duke is leaving quite the legacy for his younger brother to follow. The 13-year old Nansemond-Suffolk Academy student has... read more