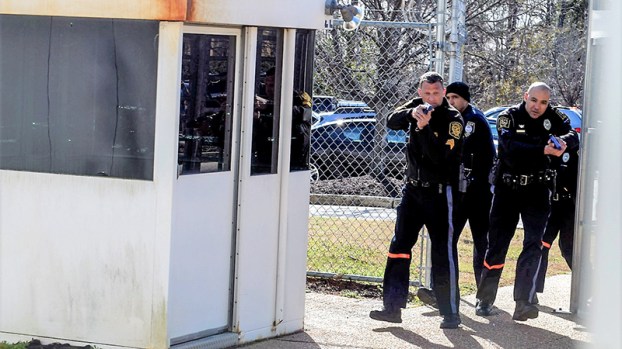 A Department of Defense compound in Suffolk conducted an active shooter training exercise on Feb. 13.

All surrounding areas, including Joint Staff and Security Offices, went into lockdown mode, which did not allow for participants to either enter or exit those buildings. The exercise involved hundreds of participating service members, government employees and contractors an opportunity to familiarize themselves with the Navy’s Run-Hide-Fight training in a practice scenario.

“We’ve been able to streamline our processes in which drills are created and initiated, allowing the command a higher degree of in-depth, detailed training. Further, NAVIFOR and the Suffolk DoD Complex now have community proxy partners who become part of the drill. The new Suffolk Virginia Department of Transportation Regional Headquarters as well as the recently completed Col. Fred Cherry Middle School are also involved and consulted during the drill planning process,” Baldwin added.

Active shooter response drills are required by Department of Defense instruction to be performed twice annually to train staff members in the procedures and necessary actions to prevent massive losses of life at any command should an active shooter event take place. Training on safe zone locations, evacuation procedures and emergency exit locations are some of the more critical aspects of this training evolution. Critical response and tactical employment of forces between the Suffolk Police Department, working in concert with the Department of Homeland Security Federal Protective Services, allows for a multi-agency training platform based on realism and joint cooperation.

“This drill was very well coordinated and performed as compared to prior exercises,” said Steve Davidson, NETWARCOM’s facilities manager and emergency management officer for the exercise. “In a real-word event, I would stay behind to assist with interviews and coordinated efforts between organizations on the compound. Team coordination with Federal Protective Services and Suffolk Police Department to use realistic props and gunfire definitely aided in the exercise’s overall performance.”

The active-shooter exercise is just one example of how the partnership between DoD Suffolk compound commands, Federal Protective Services and Suffolk Police Department are working together to provide a safe environment for sailors and staff civilians. Sufficient notice was provided ahead of time to command members to ensure safety and reinforce this is an exercise.

“Everyone followed the evacuation routes and helped others to safety during the drill,” said NETWARCOM’s Petty Officer 2nd Class Manuel Contrerasgil, one of the safety observers for the exercise. “We were able to evacuate in a timely and efficient manner considering the magnitude of personnel in our spaces.”

For more information on NAVIFOR, visit the command’s web site at www.navifor.navy.mil, its Navy News Web page at www.navy.mil/local/nidf or Facebook page at https://www.facebook.com/USNavyInformationDominanceForce.

Harris Teeter celebrated the grand opening of its new North Suffolk location Wednesday morning with a ribbon cutting that was... read more