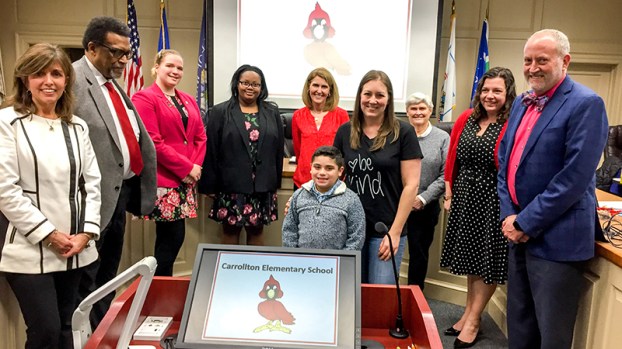 Alex Villacis, 7, a Carrollton Elementary School student, was honored at February’s Isle of Wight County School Board meeting for his Stuff the Truck project.

A Carrollton Elementary School student was honored recently for collecting food and toys for local families around the holidays.

Alex Villacis, 7, came up with the idea when he learned one of his classmates didn’t expect to receive any gifts for Christmas.

“He was playing in the park at school for recess,” said Alex’s mother, Carmen Feliciano. “One of the students said Santa doesn’t come every Christmas, because there’s not enough gifts for everybody. He was really sad.”

Feliciano said her son asked her to “tell Jesus to make sure Santa doesn’t forget to bring everybody gifts.” He then asked her if they could collect items and donate them.

Mother and son went around to different local businesses and asked for donations. They also posted on a local “trash and treasure” Facebook page and asked for families in need.

“We ended up helping 25 families, and we gave gifts to them,” Feliciano said.

Marie Berkeley, the school counselor at Carrollton Elementary School, said the Cardinals Care Club at school participated in the project by doing a drive for donations.

The club made fliers, put the drive on the morning news at school and had it advertised in the school newsletter and on its Facebook page. They ended up with two big boxes full of donations.

Berkeley said Alex’s conversation with another student seemed to have a big impact.

“Alex was very sad that Santa Claus would skip them because they don’t have very much money,” she said.

Berkeley added that it’s a thrill for her to see students stepping up and doing things when they see a need.

“It was really cool for me to hear that one of our own students came up with this idea,” she said. “Not only did they have an idea, but they followed through and made it happen.”

The Cardinals Care Club and projects like Alex’s are important even at the elementary age, Berkeley said.

“In early elementary, we focus a lot on reading and math but we also really focus on the social and emotional health and wellbeing,” Berkeley said. “We want them to grow up into adults that care. That’s part of being a successful person.”

The Isle of Wight County Mission of Hope Emergency Shelter has had low numbers of guests so far this winter... read more