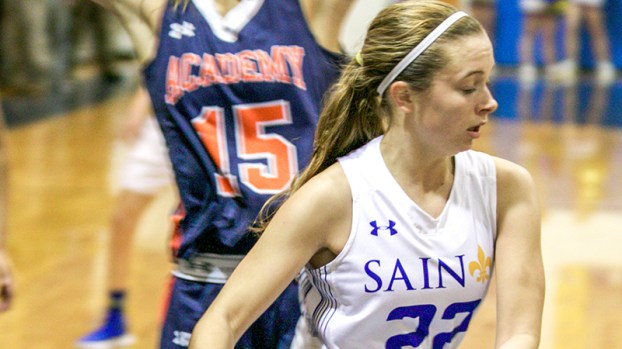 Camryn King looks to make a play for the Lady Saints. The Lady Saints will host Virginia Episcopal School in the first round of the state tournament at 5:30 p.m. Tuesday. (Jeffrey Dailey Photo)

The Lady Saints girls’ basketball team will host Virginia Episcopal School in the first round of the state tournament.

The Nansemond-Suffolk Academy girls’ basketball team will head into the Virginia Independent Schools Athletic Association Division II state tournament with the No. 6 seed. So, for the first round of the state tournament, they will match up with the 11th-seeded VES.

At 16-8 and recently falling short in the conference tournament semifinals, Coach Kim Aston believes the team is ready to go out and compete. NSA is 2-2 in their last four games. Even though the team would rather have been playing slightly better heading into the tournament, they feel good about where they are.

“We’ve been up and down here a bit lately,” Aston said. “We have been trying to get our offensive rhythm back as well as dealing with some other things. But we have high expectations from ourselves and what we can do in this tournament.”

NSA and VES met at the beginning of the season, and the Lady Saints took the win 48-26. The Lady Saints were on the road then. NSA believes they are a better team now than they were then, which should bode well for them going throughout the state tournament. The Lady Saints are still a young team with a large contingent of freshmen.

“Those younger players have been able to gain confidence,” Aston said. “I think we are all capable of playing at a high level, and I feel like they are ready.”

If NSA wins Tuesday night, they will make a quick turnaround to play at Seton School at 5:30 p.m. Wednesday.

Saints on the road for state playoffs

The Nansemond-Suffolk Academy boys’ basketball team will head on the road to take on Hargrave Military Academy in the state... read more