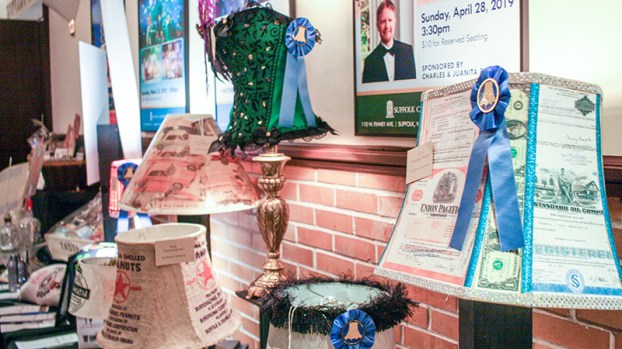 Lamps of all shapes and sizes were magnificently decorated at the Suffolk Center for Cultural Arts’ “Lamp It Up” event on Saturday evening.

Event guests lamped up for good cause

An annual fundraiser for the Suffolk Center for Cultural Arts was a sellout on Saturday, and despite the rain, plenty of people came out to “get lit” for a good cause.

The theme of the event was “Lamp It Up,” and many people came in creatively lit attire, ranging from strings of lights on their outfits to flashing accessories. Wanda Hall even sported an entire fringed lampshade on her head, complete with a light and one leg cut out of her outfit to evoke the famous leg lamp.

It was a departure from previous gala fundraisers for the center, which have featured themes like the Blues Brothers and Havana nights. Organizers thought this would be an opportunity for guests to get away from dressing in costumes, but many of them did anyway.

“Our committee all just put our heads together and came up with some wonderful ideas,” said Susan Rawls, who co-chaired the event with Miriam Birdsong. “This is totally different from anything we’ve done before.”

Dozens of decorated lampshades were submitted prior to the event. They were crafted by local businesses, groups and individuals, decorated with everything from beads and seashells to feathers and corsets. One even featured cash and company stocks; another, a burlap bag labeled “Birdsong Peanuts.”

About 20 of them were entered in a contest and awarded prizes for their creative adornment. Many simply served as more decoration at the center.

The jazz band Connected played for the first part of the evening, and The Gentlemen and a Lady kept the party going in the center’s ballroom. Photographer Allyn Brown took photo booth shots, and attendees enjoyed French hors d’oeuvres throughout the night.

“I’m so pleased,” Rawls said. “The turnout is wonderful. I think the night looks lit up, and it’s a lot of fun.”

The purpose of the event, of course, was to raise money for the Suffolk Center for Cultural Arts.

“It’s not just to keep the doors open,” Rawls said. “It’s about all the programming we have that we also offer to children in our community and outside of our community to provide arts education for everyone, whatever level you’re on. That’s what we want this center to be about.”

Miriam Birdsong added that though their own children are young adults now, they are trying to give back with events like this as well.

“We are training them to come in and do the same that we’ve been doing to continue to give back,” she said.

The lampshades that did not sell on Saturday night are on display and available for sale at the Suffolk Center for Cultural Arts, said Susan Stone, development coordinator. About 40 of all sizes and many designs are left, she said.

With the theme of “Under the Sea,” the Suffolk Education Foundation held its fifth annual gala Friday to celebrate the... read more