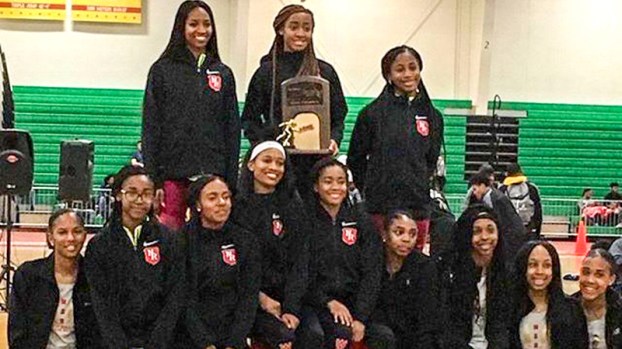 It has become the norm to see Team WAR rise to the occasion in big moments. Last weekend was no different. WAR added another indoor title, and their first state title since the departure of Coach Justin Byron.

This state meet went a bit differently for Nansemond River as opposed to the last few years. The Warriors were able to push through for a title winning the meet by nine points. As a whole, they didn’t quite have some of the performances they thought they’d have in certain events. However, it still speaks to the mental toughness WAR has a team that they were able to bring home a title despite not winning it the way they wanted.

“It was not easy by a long shot,” Coach Marco McKoy said. “It was extremely exciting to see how they were able to pull it out. The teams around us have gotten that much better. It was an excellent show of their mental preparation. Some things didn’t go our way, but they were able to overcome obstacles.”

“We were keeping track of the points throughout, and we knew it’d come down to the 4×4,” McKoy said. “The girls understood that, and they had one of their best races of the whole season.”

McKoy had been a part of state titles with the Team WAR as an assistant. However, it had a different feeling for him being the head coach. He mentioned that there is a different level of emotion that comes with it during the championship meets. He sees the lows as well as the highs — sometimes, athletes work hard and still don’t perform how they want, but there are other times when the team is winning events and clinching state titles.

“There are highs and lows you don’t experience unless you’re at the head of things,” he said. “Those low moments you feel for the kids that didn’t do well. When you have moments like the 4×4, it’s high. It’s like a roller coaster seeing and experience everything.”

Nansemond River will now shift their focus to the New Balance Indoor Nationals meet before wrapping up the indoor season.

The Lady Saints girls’ basketball team will host Virginia Episcopal School in the first round of the state tournament. The... read more