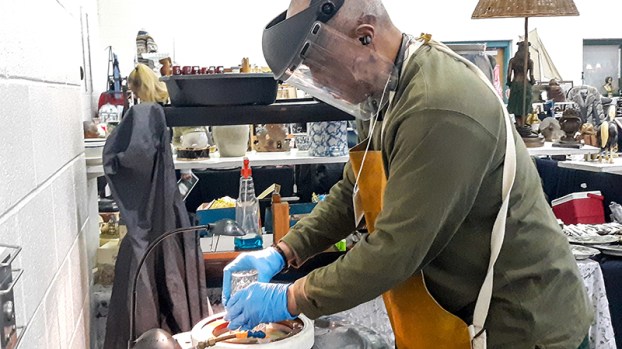 The Suffolk Art League brought hundreds of people out to its 36th annual Antiques Show and Sale at King’s Fork Middle School over the rainy weekend.

The precipitation drove many people to look for an indoor activity, and the antiques show proved to be just the ticket for people hoping for something to do.

“A little rain is good for us,” said Suffolk Art League Executive Director Linda Bunch. “You can’t play golf, can’t work in the yard, the kids’ soccer games are canceled.”

The antiques show is the art league’s biggest fundraiser of the year, and the league usually hopes to net about $18,000 from the show, Bunch said. Booth space rentals, ticket sales, food sales and a drawing bring in most of the money.

Dixie Peachy has been chair of the art show for its entire run and always does an outstanding job, Bunch added.

Visitors had plenty of time throughout Saturday and Sunday to browse and buy jewelry, furniture, linens, crystal, silver, ceramics, collectibles, knickknacks and more. Clock and watch repair and crystal repair were offered on site. The Peanut Pals group, specializing in Planters and Mr. Peanut memorabilia, had a huge selection on display, most of which was available for sale.

The antiques show is as much a social occasion as anything. Vendor Mindy Coburn, of A Family Affair in Hampton, said she enjoys watching people socialize and see people they haven’t seen in a while. She doesn’t worry too much about sales on the first day of the show, she added. Most folks come back on Sunday to buy that item they just couldn’t get off their mind.

“We will always do this show,” Coburn said.

Juliann Crocker, another vendor, said she enjoys the show for the food sales. Temptations like barbecue, Brunswick stew and more are offered at the show’s concession stand for reasonable prices, proving as much a draw as the wares on display.

Bob Shuffett, of Woodbridge, was a vendor offering many unique pieces of jewelry. He said he has been doing the Suffolk Art League show for five years now and always does well there — especially when it’s raining.

“I think that helps shows in general, because people can’t do a lot of things outside,” he said.

“There seems to be a good crowd,” added vendor Carolyn Gallier, of Richmond. “People are ready to get out, if they can swim.”

Residents of Eclipse and Crittenden are still collecting stories and working with city and state officials to be included in... read more