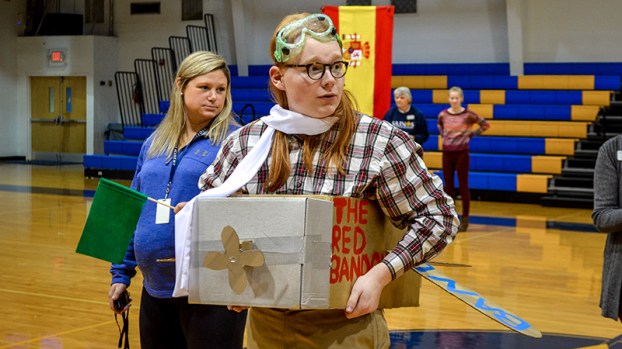 Nansemond-Suffolk Academy senior Alex Wilkerson, team captain for the Band Geeks, gets ready to compete in the 2019 Relay for Life kick-off assembly on Thursday, with Assistant Athletic Director Brittany Thornburg as one of the judges.

Nansemond-Suffolk Academy students and faculty made a high-flying raucous in the Upper School auditorium on Thursday morning during the school’s 2019 Relay for Life kick-off assembly.

About 350 students packed the gym to cheer on teams that competed in a costumed relay race as they moved between the seven different flags across the gym floor.

College Counseling Coordinator Candy Nash had been working with NSA’s Relay for Life team captains to plan the assembly since November. The theme for the Suffolk Relay this year is “Passport for a Cure — Relay around the World,” which gave them the idea of a fun assembly that was both educational and interactive.

“(The students) kept thinking of relay races that they’ve done at homecoming,” Nash said, “and I kept telling them that it also needed to be a teachable moment.”

NSA has nine fundraising teams, seven of which were competing Thursday. There was also a separate team of student volunteers pulled from the audience.

Each team prepared a soap-box styled airplane to “fly” between seven different countries’ flags in the gym. The student volunteers received plenty of encouragement from their very loud peers.

These amateur “pilots” wore goggles and scarves to go with their eclectically-designed box planes, from the “Red Bandon” by team Band Geeks to the blue nose and yellow wings of the Blonde Bombshells plane, which math teacher Richard Murphy showed off in his best blonde wig.

Teams competed two at a time, one moving clockwise between the flags and the other counterclockwise. The flags included those from the United States, Canada, Norway, Spain, Italy, China and Brazil.

The first teammate had to take the costume off for the second teammate waiting at the flag to put on as fast as possible. That first pilot also had to put a sticker onto the plane that represented one of the healthy superfoods that reduce cancer risks and that are also found in each respective country, such as salmon from Norway, blueberries in Canada and Brazilian nuts.

But before the judges gave the signal for the second pilot to move, he or she had to say “thank you” in that country’s native language.

Students in the bleachers cheered the makeshift pilots as they ran and passed their planes along, picking up superfood stickers and new words of greeting in the circuit. They all raced back to the United States flag to finish their lap with a bite of a carrot, another immune system booster.

“The kids came up with that,” Nash said about the beta-carotene finisher. “They thought it would be funny.”

Nash’s goals for this assembly were for her students to have fun, learn something and get even more excited to support Relay for Life this year. All three were accomplished in the mad-dash relay that was set to a soundtrack of songs like Queen’s “Don’t Stop Me Now.”

Their enthusiasm on Thursday made them all “supersonic” students.

“It was fun and exciting,” said sophomore Justice Walters, 16. “Having to change out (of costume) real fast with the scarf and goggles was a little difficult, because I have glasses, but it was worth it.”

The sophomores came in first in the competition, the Upper School FAST team finished second and the Breast Cancer Awareness Club took third. Each of the sophomores won a gift card worth a free Chick-fil-A sandwich.

Sophomore team captain Rylee Bono, 16, and the other NSA students understand how important it is to raise money for the Relay and support the cause. A friend from the sophomore class was diagnosed with cancer when they were in middle school, she said.

“It’s a big deal at our school, so it wasn’t hard to get people to participate,” she said. “They know that it’s for a really good cause.”

NSA has been involved with the Suffolk Relay for Life since 1998, according to Nash. The event was held for years at the school’s campus. Nancy Freeman Russell, the former lower school headmaster who died in 1999, was instrumental in bringing the event to the school after she was diagnosed with cancer several years earlier.

The school has formed teams and raised money every year since 1998, and through Thursday had raised more than $2,500 for this year’s Relay. Tara Asare, community development manager for Relay, was at the assembly to thank students and faculty for their support.

Tour the Mushroom Kingdom on Saturday

Invasive species specialist and foraging enthusiast Steven Kirkpatrick will present a free, informative talk on Saturday for anyone that wants... read more