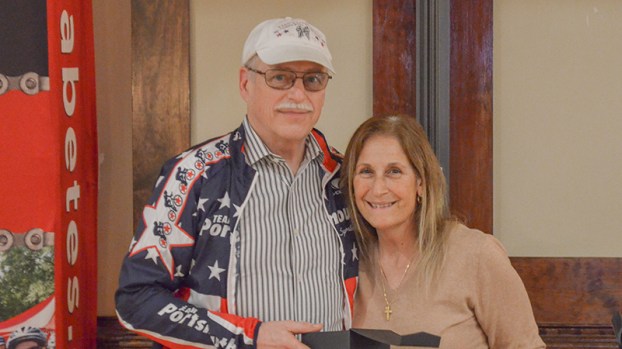 John Maher has done everything he can to help the American Diabetes Association find a cure for 14 years and counting.

That’s why he was recognized as the 2018 Volunteer of the Year for last year’s Hampton Roads Tour de Cure. He received the award at the kick-off party that was held the evening of Feb. 21 at Roger Brown’s Restaurant and Sports Bar in Portsmouth.

In addition to serving as team captain for Team Portsmouth — which raised $50,031 for last year’s Tour — Maher has also been instrumental in helping redesign the event for the Western Tidewater-Northeastern North Carolina area.

“From making connection with community leaders to designing safe and interesting routes,” said Helen Gabriel, the 2018 Special Events Volunteer of the Year, when she presented Maher the award on Feb. 21. “From identifying the perfect rest stops to recruiting volunteer groups, this individual has been an invaluable resource to the ADA staff team and Tour planning committee, and has dedicated countless hours to the cause.”

Maher started with a team of just two riders 14 years ago. The former chief of staff for the city of Portsmouth was inspired by associates who were dealing with their chronic diseases, including diabetes.

“It was my real first exposure seeing what chronic diseases do to people,” he said.

His team has grown each and every year, and last year roughly 100 cyclists of all skill levels were with Team Portsmouth. The riders organize themselves on race day by their planned travel distances, from 12 miles up to 100.

But he doesn’t call Team Portsmouth a “race team.” No one is on the team to just finish with the best time. Some on the team are faster or more experienced than others, but everyone looks after each other during rides.

There’s always a “ride leader” in the caboose of each pack to keep an eye out for anyone that’s struggling, he said.

“I’ve been very fortunate to have enough ride leaders every year to step up to do these bigger events, and they always go off without a hitch,” he said.

Maher is not a scientist that can discover a cure for diabetes in a lab, but he knew that he could help raise money.

“I’ve done fundraising off and on in my consulting life, and I know if you have 100 riders, you can raise a lot more money,” he said.

He’s also quick to share the success with all of the members of his team, as well as the other team captain, regional staff coordinators and other staff that make Tour a success.

“I’m just one of many team captains to get involved with this ride every year, and they’ve gradually improved the ride into a very prestigious, very well-run event that makes my job easier as a team captain,” he said.

To attract a large ridership each year, when there are a number of races held when winter thaws around April, Maher said that you need to have an exciting race with plenty of scenery and roads that are flat, smooth and safe. All of that can be found this year at Tour.

“If somebody wants to come out and have a really phenomenal experience, then they’re not going to be disappointed with this event,” he said.

Breakfast will be served starting at 6 a.m. and include scrambled eggs, turkey and pork sausage, yogurt, oatmeal and biscuits. Suffolk BBQ Co. at the Airport will be serving a post-ride meal, as well as a VIP meal for Champions who raise $1,000 or more.

The 100-mile riders will enjoy a healthy meal donated by the Hertford McDonald’s, and all participants ages 21 and older will be treated to a complimentary post-ride beer from Beach Ambassadors. Beer will also be for sale for those who come to cheer on participants, as well.

The afterparty will include live music from the Fuzz Band and Astro DJs, along with games and free screenings and educational material in the wellness village.

Nansemond-Suffolk Academy students and faculty made a high-flying raucous in the Upper School auditorium on Thursday morning during the school’s... read more