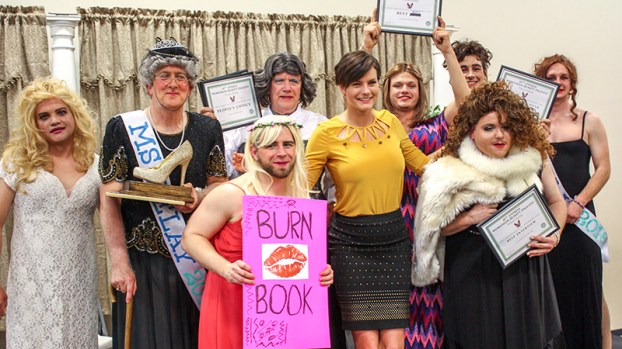 It was a wild night filled with all the familiar trappings of a beauty contest, including casual wear, evening wear, talent and interview questions.

The only difference was that the contestants were men, and they were dressed as pageant contestants to raise money for the Nansemond River Pilot Club to donate to Relay for Life.

“I’m just shocked,” said Warren Johnson, who competed as “Ima Vailable” and won the title of Ms. Relay for Life 2019. “I could have sworn one of those other ladies was going to win.”

Johnson said he’s competed in another event like the Womanless Beauty Pageant before in another area of Virginia. “I thought it might be a good thing to do again,” he said.

The contest featured seven men strutting their stuff first in casual wear, then performing a talent, and finally with an interview question and an eveningwear competition. Talents ranged from Stephen Butler’s rendition of “You’re the One that I Want,” from “Grease,” to Johnson’s musical stylings on the guitar and a surfing routine by Josh Bennett.

“I just do it to support the cause,” said Butler, who was in his second year competing as “Stephanna.” “My wife and kids really enjoy when I do it, and I had a ball.”

The Pilot Club raised money for the American Cancer Society through ticket sales, a silent auction and a 50/50 drawing. The People Choice award was decided by donations to contestants’ money buckets, and Gerald Brunner — “Ms. Into” — won with more than $400 in donations alone.

Contestants and audience members alike had lots of fun, but it was all for a very serious cause. The mood sobered during the show’s intermission for a tribute to cancer survivors and those who have died of cancer, whose names were showed on a screen.

Cody Anderson said it was his first time competing in the event, and he did it for his mother, who has Stage IV breast cancer and was in attendance.

“I’ll be back next year, Lord willing,” he said.

Country music artist Colton James also performed his moving song, “Brave Men,” about those who serve in the military, as well as other selections.

Becky Adams, who co-chairs the event with her sister-in-law, Leslie Adams, said the 2019 rendition was “one of our best years yet.”

“We had great contestants, great judges and a wonderful emcee,” Becky Adams said. “This night wouldn’t have been possible or nearly as successful if it wasn’t for our wonderful sponsors that helped make this night such a huge success.”

Work is currently under way to stabilize and maintain three sections of shoreline on the Nansemond River, between Sleepy Hole... read more