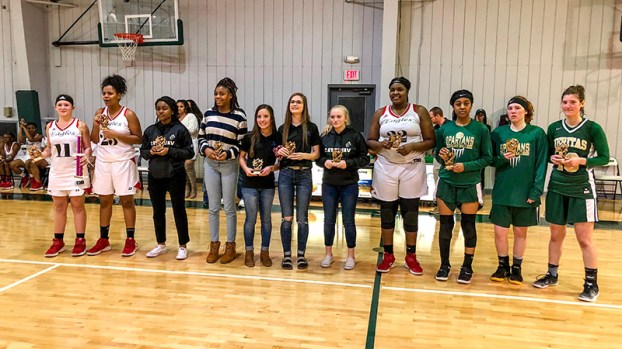 Tawnee Steele, Jadyn Patton and Laura Cornette of the Suffolk Christian Academy Lady Knights were recognized as All-Conference members for the 2018-2019 season. They are pictured with the rest of the All-Conference team. (Submitted Photo)

SCA had a solid season within the Hampton Roads Athletic Conference. They finished as the third-seeded team for the playoffs and had some key wins during the regular season.

“Having three girls make All-Conference is a big accomplishment for us,” Coach Kristy Patton said. “We had a couple of others who were right in the running that could have made it. Overall, the girls just did a solid job.”

The Lady Knights are excited about the future, as all three All-Conference performers return for next season. SCA’s season ended with a close conference tournament opener loss against Veritas Collegiate Academy.

Patton said she was happy with the way the team finished the season and where they will be going moving forward. Even though the season didn’t end the way the team wanted, an encouraging sign for Patton is the team’s success in spite of its youth and the chance to be even better next season.

“We don’t lose anybody for next season, and that’s always a good sign,” Coach Patton said. “We have a bright future, and we can take the things we learned this season into next season a year better.”

Patton has plans to get her team together for offseason workouts as well as attend some team camps together to get prepared for next season.

“We want to keep building our chemistry while also working on our skill set,” she said. “We want to have fun doing it. We have done a lot of good things this season, but we also have some things we need to clean up.”

The Lady Knights want to pick up where they left off this season. During their season, they were able to win a couple of tournaments. They also had a win streak as long as eight games this season.

“They are a great group of girls that are willing to work hard, and you don’t always get that as a coach,” Patton said. “We have a bright future ahead of us, and we are going to continue to stay focused, and I am really excited about what’s to come and see more of the girls’ hard work pay off.”