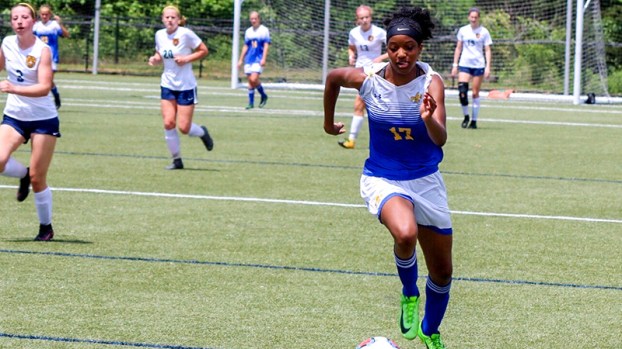 The Nansemond-Suffolk Academy girls’ soccer team is hoping early rhythm to start the season won’t be a problem.

The soccer season kicks off for the Lady Saints this week. Because of the successful basketball season for the Lady Saints ending a week ago, some of those players are coming straight from the court to the field. Also, with spring break just wrapping up for NSA, there hasn’t been a lot of collective time for the team to be together before the season starts.

The Lady Saints haven’t been able to have a full practice yet with the whole team together. However, Coach Mike Dick is excited about the team and what the Lady Saints could potentially do this season.

“We are losing some strong seniors from last year, but we are excited about what we have returned,” Dick said. “We have a couple of injuries we are dealing with as well. But we hope once we get everyone, we can start rolling.”

To start the season off last year, the Lady Saints lost their first game but followed it up with a six-game win streak.

“We can be as strong as we were last year in terms of our starters,” Dick said. “I don’t think the chemistry will be too much of an issue because we have a lot of familiar faces back. Everything will be more so getting in soccer shape and trying to get as healthy as we can.”

NSA will start its season Monday when they compete in a soccer tournament at Mary Passage Middle School. The tournament will feature private and public schools, and NSA will take on Poquoson High School first.

“It’s a good tournament for us to face some good competition and see where we are,” Dick said. “We want to make another run this year, and we feel good about our chances.”

Cammy Reid was voted Suffolk News-Herald Player of the Week after scoring 13 points and grabbing nine rebounds in a... read more