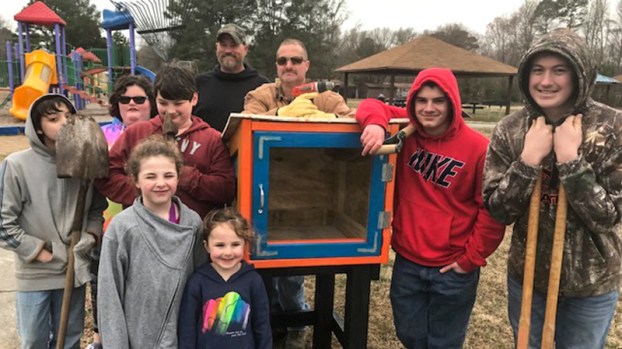 Lake Kennedy Park now has a Little Free Library box, thanks to the more than 30 people at Bethlehem Christian Church who worked on it as part of a local ministry project.

Pastor Matt Winters said the library box, which was installed at the park Saturday and is adjacent to the parking lot and the playground, stemmed from an initiative that grew out of last summer’s Vacation Bible School as a way to bless the community.

“I think it was just great to see the kids care about the community and give something back to kids who don’t have the same opportunities,” Winters said.

While the project took several months to complete, Winters said much of it was done during the Vacation Bible School. As part of the project, the students prepared a second box for a yet-to-be-determined location in North Suffolk.

“It was a great project,” White said. “The kids really enjoyed it, and now they can say they have artwork out in the community, too.”

White said the scenes on the library box at Lake Kennedy Park are of animals that are found in Suffolk, especially in the Great Dismal Swamp. They depict a black bear, heron and raccoon. The top of the box also has the signatures of students who helped work on the box. The other library box has images of a train as well as the Nansemond River wetlands.

Winters, who dropped off books to put in the Lake Kennedy Park Little Library Monday, said he hopes everyone will enjoy sharing books. The box can hold about 25 to 30 books.

“I think for us, what was important,” Winters said, “is that we wanted to do something in the community that was lasting, that would make a difference and would be a blessing for others.”