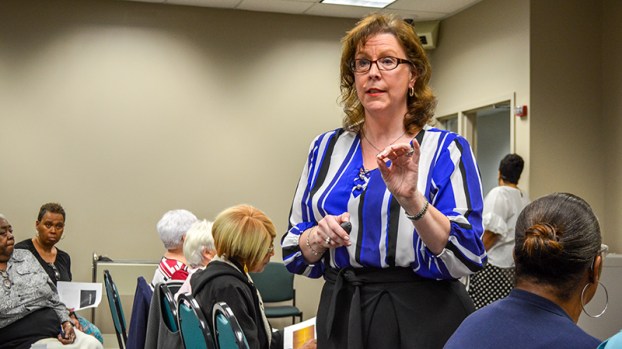 Participants in the seventh annual academy have been meeting twice a week to learn the mission, policies and day-to-day operations of the Commonwealth’s Attorney’s Office, along with the city’s other constitutional offices. Speakers have met with these citizens to talk about general crimes, general district court and drug cases and victim and witness services since the academy started this year.

Walls spoke in the third-floor jury room at the Godwin Courts Building on North Main Street. As part of the Juvenile and Domestic Relations team, she dove into local cases to explore how justice is delivered in these extreme cases.

She explained the specific elements that constitute rape cases and the differences between those involving victims that are 13 years or older and those that are younger.

Cases where the defendant is at least 18 years old and has been proven to have had sexual intercourse with a victim that’s 13 years old or younger come with life sentences.

Walls didn’t mince words when it came to counting each individual misdemeanor and felony a defendant has been accused of committing on a child. She described walking through them with the victims to understand what can be prosecuted in court.

Rape in Virginia is punishable with sentences ranging from 5 years to life, Walls said, and in Virginia there are punishments for separate acts. There also doesn’t have to be corroborating injuries on the victims, because they’re often on parts of the body that heal the fastest.

There also doesn’t have to be evidence that the victim tried to flee or fight their attacker.

One of those crimes was committed by Larry Keith “Bear” Baker, who was 66-years-old when he was arrested in 2012. A 13-year-old family acquaintance told police that he had photographed her nude and touched her inappropriately on numerous occasions, according to a Suffolk News-Herald report. The grand jury indicted him on 38 counts of various sex crimes in 2013.

When Walls spoke to the jury about the evidence found during that investigation, she didn’t hold back. She recited the explicit titles of videos found on Baker’s computer to the jury.

“When you’re in court, you have to make sure that … what happens comes out,” she said.

Up to one in three girls and one in seven boys will be sexually abused at some point in their childhood, Walls said. It’s a “crime in darkness,” with roughly 88 percent of cases estimated to never be reported to the authorities, and in as many as 93 percent of those cases, the child knows their abuser.

But Walls and her team look for evidence in the signs that tell these horrific stories, such as in child abuse crimes.

Walls said in her presentation that a report of child abuse is made every 10 seconds, and 80 percent of children that die from abuse are under the age of 4.

She highlighted the case of Suffolk couple Linwood McKinley Jones Jr. and Shawntay Demetria Jones, who were sentenced for the 2008 starvation death of their 11-month-old daughter.

A Suffolk News-Herald report quoted Dr. Michelle Clayton, a prosecution witness from Children’s Hospital of the King’s Daughters, who described how the daughter weighed 17 pounds at the time of her death and had lost weight since her last doctor’s visit.

Prosecutors find the truth in what they do and don’t find in the crime scenes. There may not be food in the cabinets or dirty diapers in the trashcans, but instead drugs, filthy rooms and other signs of child neglect.

They also contact medical examiners to find out how the child died and compare that with the defendants’ accounts.

“One of the things that we’re doing is that we’re calling medical personnel, because if (the defendants are) telling us a story, we’re trying to talk to the doctors to make sure that the story fits,” Walls said.

She told the academy attendees that it’s important to have these discussions so that more people can learn how to better look after their own children and other children in their community.

“They need love, they need care and they need compassion, and children really shouldn’t be afraid,” she said.

Roasted oysters in Chuckatuck this April

Patrons will be steaming for freshly roasted oysters when the Chuckatuck Ruritan Club’s annual oyster roast returns this April. The... read more