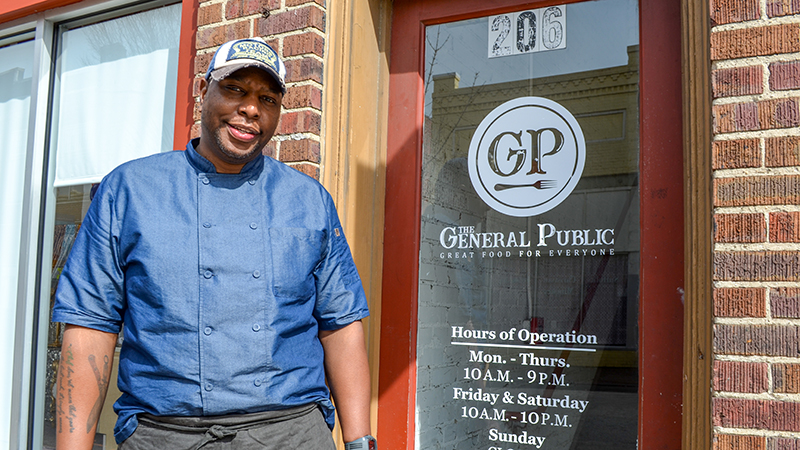 General Lewis, owner of the The General Public restaurant, stands beside the storefront on East Washington Street.

Diners in downtown Suffolk can now enjoy a new casual, hearty and rustic menu at the General Public restaurant on East Washington Street, right by Brick and Mortar Brewing Company.

General Lewis, the owner and restaurant’s namesake, said that he was excited to open his own restaurant amid all the other developments in downtown Suffolk.

“I see their direction they’re trying to go in, and I just want to be a part of it,” he said about this part of downtown and its growing number of food and drink establishments, such as Brick and Mortar, Ryan’s Steaks and Cakes and the El Korita Mexican restaurant, all also on East Washington Street.

The restaurant held a soft opening on Friday to coincide with the St. Patty’s-themed festivities at Brick and Mortar this weekend to celebrate the brewery’s one-year anniversary, Lewis said. The official grand opening for the new, approximately 2,100-square-foot restaurant is set for March 30.

Lewis is a New Jersey native with 21 years of experience as a chef at steakhouses, gourmet rooms, country clubs and casinos and other places. He’s been living in Hampton Roads with all of his collective cooking experience for five and a half years, he said.

His company General Meals Foods Services Inc. offers corporate dining at locations in the Nauticus science center and museum in Norfolk and in Newport News City Hall. They’re also in the process of opening a sandwich shop at the Newport News shipyard, he said.

The General Public menu has flexibility and plenty of flavors for different tastes. The Public Bowls include a Coconut Curry Shrimp dish with grilled shrimp, sautéed vegetables, jasmine rice and coconut curry sauce. The GP Burger has two patties, double cheddar, bacon and a special sauce that’s a blend of herbs, relish, garlic, ketchup and mustard.

Menu items like the wings, sandwiches, baskets of fried shrimp — plus sides of waffle fries topped with Old Bay, white cheddar and other mouthwatering opportunities — go well with Brick and Mortar beer next door, Lewis said.

“I actually use their beer for my peanut sauce, barbecue sauce and beer cheese,” he said.

The atmosphere of his restaurant also embraces the charms of the historic district. He described how he came from up north where they turned “warehouses into restaurants,” and he likes retaining the old qualities of his new space.

“It says a lot about the history, (and) it keeps the history going,” he said. “It’s a lot of character.”

The General Public hours of operation are 10 a.m. to 9 p.m. Monday through Thursday and 10 a.m. to 10 p.m. Fridays and Saturdays. The restaurant is closed on Sundays. Call 922-8040 for more information.