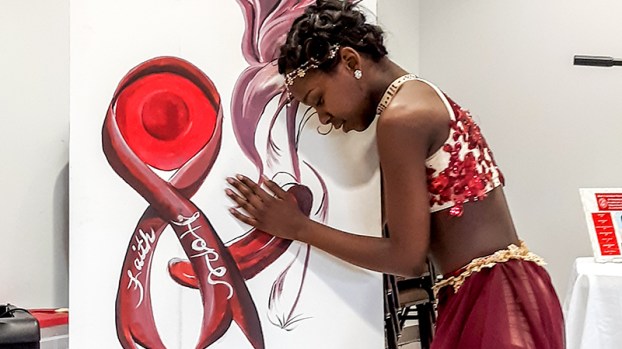 Ayana Johnson, 12, concludes a dance routine at the Suffolk Sickle Cell Foundation banquet on Saturday at East End Baptist Church. Ayana has sickle cell disease and is one of the clients of the foundation, which helps families affected by the disease.

“How do you live when the one thing that’s giving you life is fighting against you every day?”

That was the question posed by the narrator in the music for Ayana Johnson’s dance at the Suffolk Sickle Cell Foundation’s annual charity awards banquet on Saturday at East End Baptist Church.

Ayana, 12, has sickle cell disease, an inherited disorder in which red blood cells are abnormally shaped. Because of their abnormal shape, they have reduced ability to carry oxygen through smaller blood vessels. African-Americans are most susceptible to the disease, with 1 in 365 African-Americans being born with it. It also can affect those of Mediterranean and Middle Eastern descent.

Different people are affected differently, but most patients have anemia, repeated infections and periodic episodes of pain. Complications can lead to organ damage, especially in the lungs, kidneys, spleen and brain.

Ayana, however, seemed in top shape as she danced an interpretive number about her battle with sickle cell disease.

“It’s something I love to do,” Ayana said of dancing. She practices dance more than 20 hours per week and does a number of styles, including ballet, tap, jazz, hip-hop, contemporary and pointe.

“You can do anything you can put your mind to,” Ayana said. “The disease does not define me, nor should it define anyone else.”

Ayana said her disease is painful at times when she is going through crises, which is how sufferers typically refer to flare-ups of pain from the disease. She also gets dizzy, and the medications make her feel nauseated.

“As with everything, you have your good days and bad days,” said her mom, Hermionne Johnson. “It’s very unpredictable.”

But Ayana has flourished in spite of the disease, in part thanks to the Sickle Cell Foundation. The organization sponsored her trip to the National American Miss Pageant last year, where she was named Miss Suffolk, National American Miss Pre-Teen 2018. She also has received a Joffrey Ballet School Scholarship to study ballet this summer and is active at her church, St. Vincent de Paul Church in Newport News. She is an honor student at Col. Fred Cherry Middle School and plays violin in the school orchestra. Her goal is to become a pediatric hematologist to help others like her.

Ida Chesson also was a guest speaker at Saturday’s banquet. She also spoke about not letting the disease define her.

“It’s giving me strength to endure whatever comes my way,” she said. “I’m a normal person, and I have a normal life.”

The Suffolk Sickle Cell Foundation assists local families with a sickle cell sufferer with financial and practical aid when needed.

Hermionne Johnson said the foundation has been “like extended family” to herself, her husband, Leonard Johnson, and Ayana.

“They helped me to advocate for myself and really find a different part of who I was,” Ayana said of the foundation.

Felton Whitfield, president of the organization’s board of directors, said the foundation hopes to bring more attention to the cause in the coming year, “so we can do more in a greater and bigger way.”

“We want to get more people on a level to understand what it’s all about,” he said.