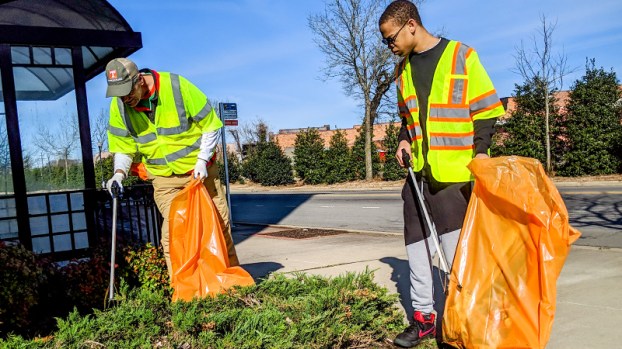 Downtown gets green and clean

Participants, among them a contingent of JROTC students from King’s Fork High School, spread out across downtown for about three hours to pick up trash.

Kathy Russell, chairwoman of Keep Suffolk Beautiful, said people don’t understand that litter doesn’t just go away. When it rains, the trash gets pushed into the storm drains and ditches, which lead to tributaries, rivers and then into the Chesapeake Bay and the ocean.

“I think people just don’t realize when they litter, that there’s consequences to that litter,” Russell said.

She said the top thing that’s usually found during cleanups is cigarette butts, and then wrappers and straws close behind, though on Saturday, groups also found tires and other trash, collecting about 60 bags in total.

“Cigarette butts don’t even belong on the ground,” Russell said. “They belong in the correct places.”

Students and other participants involved in the cleanup said they were not surprised at the amount of trash they were finding.

“This is what America is,” said Christian Guy, 15, a freshman in King’s Fork High School’s JROTC program. “They just throw garbage everywhere.”

Dori Wingate, a part of the Hampton Roads-based group Litter Bitters, was leading a group of those students. In less than a quarter of a block, she had filled more than half a bag with trash.

“Truthfully, I’m not surprised by any of the trash whatsoever,” Wingate said. “In this day and age, people don’t think about what they’re doing to the environment.”

“Yeah, it’s pretty gross,” said Brianne Jolley, 14, a freshman in the King’s Fork High School JROTC program, looking at the trash in the bag. One of the students in her group, freshman Andrew Bender, 15, found a tire in a grassy field along Culloden Street.

Jolley said she gained an appreciation for the amount of trash there is in the city through another Keep Suffolk Beautiful cleanup. At that time, she said she found cigarette butts, cups and straws, among other things.

“It makes you think about it more in your regular day,” Jolley said of seeing all the trash on the ground. “Don’t throw this out. Look for a trash can. Don’t just throw something down.”

Russell said she hoped the cleanup would have a positive effect and make the city cleaner.

“Hopefully, we’ll get downtown Suffolk cleaned up and looking pretty for the spring,” Russell said.

Families are invited to Mattanock Town this weekend for a celebration of Nansemond Indian culture that will both entertain and... read more