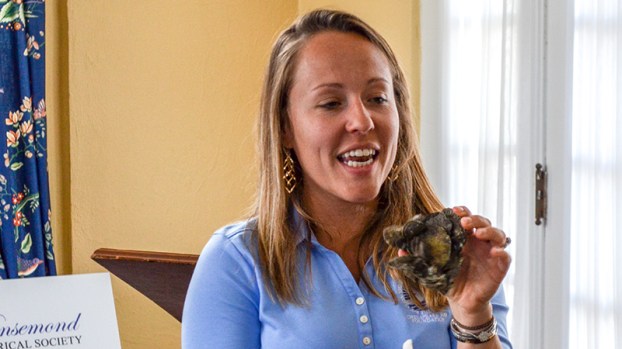 Heather Lockwood, the Virginia Oyster Restoration Specialist for the Chesapeake Bay Foundation, at the “Afternoon Conversations” presentation held at the Phillips-Dawson House on March 13.

More than a dozen people enjoyed an up-close-and-tasty lesson last week on the importance of oysters in the Chesapeake Bay and the ongoing efforts to keep the bay vibrant with both oysters and other aquatic life.

It was the latest in the “Afternoon Conversations” series between Suffolk Public Library and the Suffolk-Nansemond Historical Society. The series facilitates discussions on regional history and other local topics of interest.

Lockwood and her team examined the history of the oyster harvesting industry in the Chesapeake Bay watershed and highlighted local points of interest. This industry exploded after the Civil War, when watermen were unregulated until the Virginia Marine Resources Commission began enacting regulations in the late 19th century.

There were the Oyster Wars, which included cases of “oyster piracy” in the Suffolk area on the Nansemond River and the city’s own booming oyster economy going back to the 1860s, with local oysters being shipped throughout the country.

Guests enjoyed their own samples of fresh oysters at the presentation. Virginia oysters thrive in eight different regions of the Chesapeake Bay and its tributaries, each with its own distinct flavors. The York River oysters served at the presentation were less salty than those found in other regions.

“It was good,” Mike Greene said about his sample. “I’m not a big oyster person, but that was good.”

“We have to be very, very cautious with all kinds of things that we are doing on land, as well as in the water,” she said.

Oysters are a keystone species in the bay’s ecology and amazing filter feeders. They filter algae, sediment and other pollutants and in doing so improve water quality and clarity.

Their large reefs serve as habitat for fish, crabs and other creatures, several of which were shown first-hand at the presentation.

Wood and Mowery showed the audience oyster toadfish, skilletfish and blue crabs that thrive in a clean bay environment. Mowery held a small blue crab in the palms of her hands.

“We like the big ones, but the tiny ones are really cute,” she said with the crab in-hand.

Lockwood explained how a single adult oyster can filter up to 50 gallons of water per day.

When Captain John Smith and his crew were in the Chesapeake Bay centuries ago, the oyster population at that point could filter the entire bay — Virginia, Maryland and all the creeks and tributaries — in three to five days. Now it takes over a year with the depleted oyster population, she said.

“These guys are amazing at cleaning the water. We need them not only as a food source for ourselves, but to make our waters swimmable, fishable and water that we want to dip our toes into,” she said.

Lockwood and others have been working to repopulate the bay with help from volunteers in the Oyster Gardening Program and its “Save Oyster Shells” recycling program. One of the public shell recycling drop-off locations is at Bennett’s Creek Park in Suffolk, beside the parking lot and in front of the boat ramp and fishing pier.

The foundation is looking for oyster restoration opportunities in the Suffolk community.

“The Chesapeake Bay Foundation is looking for ways to partner with the Suffolk community,” Lockwood said in a phone interview, “so if you have any ideas for local oyster roasts that are occurring in your area, restaurants or other ways that CBF can get involved, let us know.”

Contact Heather Lockwood via email at hlockwood@cbf.org for more information.

Participants can help in the fight against cancer this month by signing up for the annual Bon Secours Colon Cancer... read more