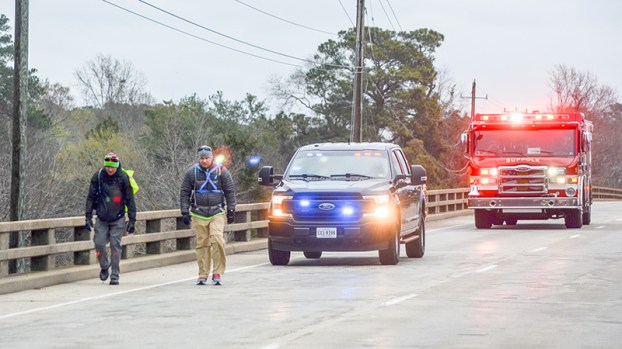 Suffolk Fire and Rescue’s Fire Medic 2 Joe Jarman, 42, and Lt. Travis Saunders, 39, walk across the bridge over Bennett’s Creek on Route 17 with an escort of support vehicles on Tuesday morning.

Firefighters step up for a cure

Two Suffolk firefighters walked westbound on Bridge Road under damp, overcast skies Tuesday morning. They already had 32.2 miles under their belt in the last few days, but still had roughly 100 more to go on foot.

Fire Medic 2 Joe Jarman, 42, and Lt. Travis Saunders, 39, are with Suffolk Fire & Rescue and Suffolk Professional Firefighters Local 2801. They have 29 years of combined firefighting experience in Suffolk — 16 for Jarman and 13 for Saunders — and they’re avid fundraisers for the annual Fill the Boot campaign, which raises money for the Muscular Dystrophy Association.

They left Suffolk Fire Station 5 on Bridge Road early Tuesday morning to keep marching. Their sacks had clothes, medical supplies, toiletries, food, water — which Jarman said was the heaviest thing of all — and their boot to collect donations.

They were aided by support vehicles and the gestures made by others on and off the road. Drivers honked their horns as they drove by the pair on Bridge Road, flashing smiles and waving at them as they sped past.

“That happens a lot,” Jarman said as he and Saunders marched on.

Jarman and Saunders began their “March for MDA” on Sunday when they started by the statue of King Neptune at the Virginia Beach oceanfront. The plan is to take the Fill the Boot campaign on the road by hiking 130 miles to arrive in Richmond on Friday.

Word of the journey has already spread, and their story has already raised awareness for the MDA. Each step they take only adds to this stir of support.

“These two guys are sacrificing their time away from family, away from the academy, away from their companies to care for others,” said Suffolk Fire Chief Michael Barakey said at the station Tuesday morning, “and that’s what firefighters do.”

Beyond walking, rucking (exercising by walking with a weighted pack) and configuring their packs, there wasn’t much else they could do to prepare for this undertaking, Saunders said. But the weather had been good up to Tuesday morning and there wasn’t much hassle thus far — aside from blisters on their feet.

The city of Suffolk teamed with the fire department to help escort them through stretches of road that had no sidewalks or parking lots. Pam King of Local 2801 said they’re keeping up with any “changing needs” they may have as they move closer to Richmond.

They’ve also benefited from donations by both businesses and citizens. There was even a gift basket waiting for them at Station 5 when they arrived Monday night.

“The biggest thing is making sure they have what they need,” King said, because these two aren’t stopping. Rain or shine, they’re “all in,” she said.

Their spirits are lifted by the constant outpouring of support from people on their route, whether its pedestrians, cyclists, drivers or others.

“Everybody has been great, (and) we’ve collected almost $200 in the past few days,” Saunders said. “We’ve had people coming out of businesses and hunting us down. We’ve had people pulling over and getting out (of their cars).”

“Running out of restaurants,” Jarman added with a laugh.

The March for MDA is another step forward for the partnership between MDA and the International Association of Fire Fighters that began in 1954, when IAFF vowed to keep up its support until a cure was found, according to the press release.

The two organizations are encouraging states to expand newborn screening programs for neuromuscular conditions by adding tests for specific disorders. This would give newborns with these conditions the best possible chance at receiving the care and support services they need as early as possible.

Louise Zingaro, the executive director of the MDA of Greater Virginia, said that this partnership has helped the organization provide services to those affected by these conditions for the past 65 years. Research has revealed more than six new treatments that help to slow the progress of these debilitating conditions and build hope for the families that are affected by them.

Jarman and Saunders have been supporting MDA’s efforts in numerous other ways as well, Zingaro said, like cooking meals at camps that have fed dozens of children. Their long walk is just further evidence of their commitment.

“When you think how precious people’s vacation time or free time is these days, for them to give this amount of time for the cause and for the awareness is truly heartwarming, and I think it’s further evidence of that close relationship between the IAFF and MDA,” she said.

They’re walking for brave individuals like 9-year-old Cole, who has Duchenne muscular dystrophy. He’s the MDA ambassador that comes to each Suffolk Fire & Rescue station to remind the first responders why they’re out there to fill the boot, whether it’s hot, cold, raining or snowing, said.

Cole and his classmates from school will be traveling to cheer the men on at some point during their meaningful walk.

“The diseases that we’re trying to raise money for take the ability to walk away from people that are affected by it. We thought what better way to honor them than by walking,” Saunders said.