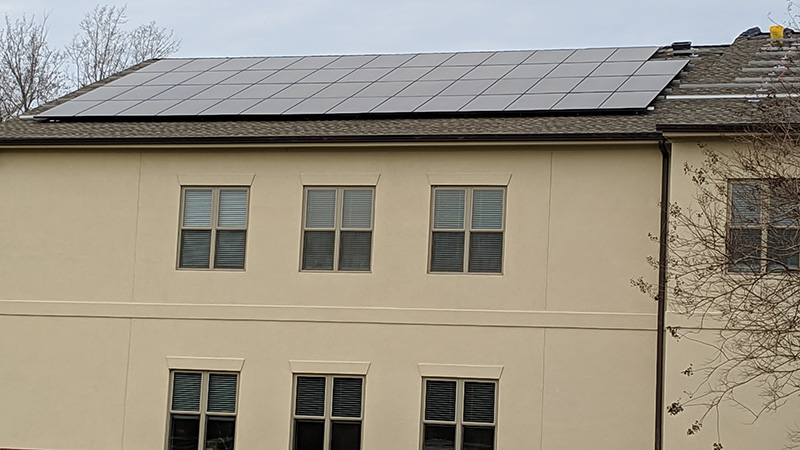 Convert Solar of Virginia Beach was at St. Andrew Presbyterian Church off of Bridge Road Monday installing solar panels to the roof of one of its buildings. (Jimmy LaRoue/Suffolk News-Herald)

After hearing a Sierra Club presentation about solar energy last October, Tom Endrusick was hooked, and it didn’t take long to hook his church, St. Andrew Presbyterian, into going solar.

The presentation included a representative from Convert Solar, as well as Ruth Amundsen from Solar United Neighbors, who explained their role in installing more than 500 solar panels on the roof of Norfolk Academy.

Endrusick, who is on the church’s property committee, said he has been trying to sell other churches across the region on the idea ever since.

Over the past several days, Convert Solar, a company based out of Virginia Beach, has been installing solar panels on the roof of one of the church’s buildings. Workers completed the project Monday, and the church will use those solar panels to generate some, but not all, of its electricity. The panels will generate 33 kilowatts of electricity, Endrusick said.

The church, through an agreement with Convert Solar, will pay nothing for the installation and upkeep of the solar panels for the next 10 years and pay just for the electricity generated through the solar panels at a rate of $0.12 per kilowatt hour, Endrusick said.

Endrusick, a member of St. Andrew who’s helping coordinate the project for the church, said the church would save more than $75,000 as a result. The church will write two checks for its monthly electric use — one to Convert Solar and another to Dominion Energy, with its total amount being equal to or less than its current Dominion bill. He said the cost savings for the church convinced him that the project was worthwhile.

If the church doesn’t produce electricity from the solar panels, it will still receive electricity through Dominion.

“I can make this argument that this is a really good thing to do based solely on economics,” Endrusick said, “without explaining that, oh yeah, by the way, we’re going to protect our planet. That’s a little side benefit you get.”

Endrusick said the church received three estimates to install the solar panels, but other companies wanted the church to buy them outright, with those companies only doing installation.

The reaction from church members has been amazement that the church isn’t having to pay anything for the installation and upkeep — and excitement.

“Nobody understands that, no matter how much I keep explaining it, that yes, it’s a huge economic benefit for us,” Endrusick said. “I had one comment … ‘but they look ugly.’ It’s a flat, black surface. It’s like a privacy fence around my yard. I’m sure some people would say that’s ugly, but we’ve grown accustomed to having a fence around your yard. You just have to get used to having flat black panels on your roof.”

Judging by the church’s sign, it’s using the innovation to reach out to the community, as well.

“Caring for the earth. Solar panels going up out back. Come see!”