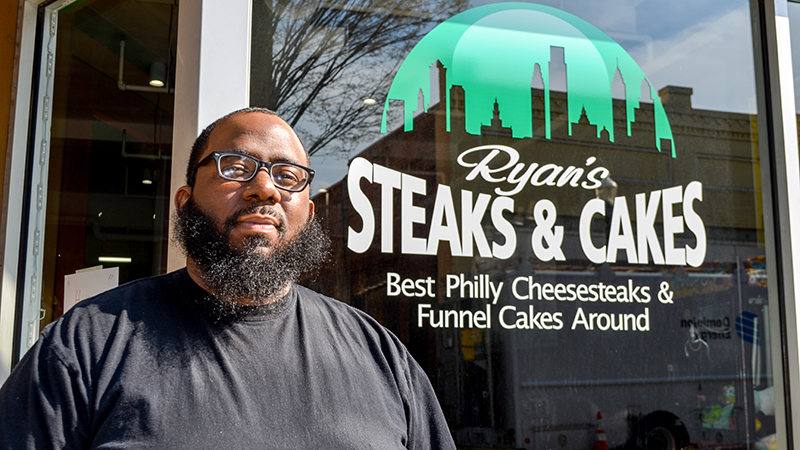 Ryan Byrd, owner of Ryan’s Steaks and Cakes, outside of his restaurant on East Washington Street.

Everyone enjoys Philly cheesesteaks their own way, according to Ryan Byrd, owner of Ryan’s Steaks and Cakes on East Washington Street.

Byrd was born in Smithfield but grew up visiting family in Philadelphia. He said debate is endless for what goes best on the sandwich.

The cheese alone is a point of discussion. Some argue for white American cheese, he said, while others say it’s Kraft Cheez Whiz.

But all of the talk is settled on a solid foundation of tasty meat.

“The foundation is the taste of the meat,” Byrd said. “Besides that, it’s however you want it.”

Ryan’s Steaks and Cakes has been cooking up cheesesteak favorites since Byrd and his family opened on Presidents Day, Feb. 18. The restaurant serves Philly cheesesteaks — plus chicken and other specialties — on imported Amoroso’s rolls.

Byrd’s sister, Tonya Batten, operates the Funnel Cake Café in Portsmouth and brought her sweet confections to the new Suffolk restaurant. The whole thing is a family endeavor, with family recipes throughout the menu, including the meat seasoning and marinade, he said.

This family-oriented business is also located in a bustling section of downtown Suffolk with restaurants like El Korita and the General Public beside them on East Washington Street, along with Brick and Mortar Brewing Company.

“It’s just been a lot of love across the board with everybody,” Byrd said about the others on East Washington Street. “We’re just helping and supporting each other with everything.”

Suffolk citizens have also been very welcoming, he said. Specialty cheesesteaks like the hibachi — topped with teriyaki shrimp and yum yum sauce — have been a hit, and the funnel cakes are popular, as well.

“The funnel cakes are a major hit. It’s like carnival-type food,” he said, “(and) now it’s like they don’t have to wait for a carnival or a fair (to get funnel cakes). They can get them now.”

It’s a great start for Byrd’s first restaurant. The Chesapeake resident spent the last decade working as a mental health counselor in Virginia Beach, and he said that it’s been a nice transition to operating a restaurant.

He’s still able to help people with positivity, whether it’s his generosity with the local homeless population or just being a friendly face to customers.

“Being the ‘nice guy,’ I guess this gives me another way to do that. To help people (and) see them be happy,” he said.

The plan is for Ryan’s to keep growing as summer approaches, with more decorations, tables, training and staff, plus a machine for Philadelphia Water Ice, a flavored Italian ice treat, to help customers cool off.

“We just want to be better and better for our customers,” he said.