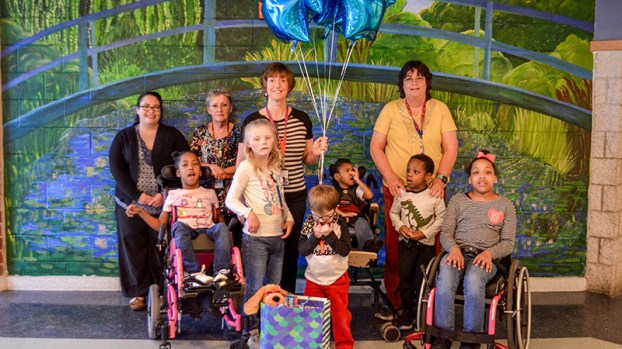 The challenge was held once again by software company Zoobean and “Shark Tank” billionaire investor Mark Cuban. Cuban challenged 250 schools and libraries across the country to meet a collective goal of reading for at least 5 million minutes and 75,000 books in January.

Suffolk Public Library was ranked as one of the 40 top libraries nationwide, with 9,916 books read throughout the month of January.

Renee Johnson’s Creekside Elementary class of seven special-needs students logged more than 500 books, the most of any classroom that logged books during this past challenge.

“The amount of reading that Ms. Johnson’s class was able to accomplish during the Winter Reading Challenge exemplified what the challenge was all about,” said the library’s youth and family services manager Jennifer Brown, who brought the winning class their prize on Thursday. “We’re just overjoyed that we were able to support their specific learning needs by adapting the prize that was offered this year.”

The original prize for the top-performing classroom was going to be a set of class books, but Johnson explained to the library that her classroom already had plenty of books.

She and teacher’s assistants Mary Burgess and Diana Jones had read many of these books to the kids throughout the challenge to help them focus and hone their attention spans.

“We’re reinforcing all these kinds of things that ultimately show that a picture represents something real, and written words represent real speech,” Johnson said.

Johnson instead asked for interactive toys that would help show these students the relationship between cause and effect.

Take, for example, their classroom’s hip-hop rabbit. This toy will move and sing at just the push of a button, which shows them that because of their actions, something fun has happened, Johnson said.

The toys that Brown brought to Johnson’s class on Thursday will help further reinforce that relationship in their young minds.

“The library has been very accommodating,” Johnson said.

Brown also brought seven blue Mylar balloons, one for each student. Johnson explained that her students prefer Mylar balloons because they don’t make a loud “popping” sound like typical latex ones. She said they were very excited for these balloons and that they’ll be great for a lesson on gravity.

“We’re going to use the balloons to support education activities,” she said.

Fifth-graders at Creekside and Hillpoint elementary schools competed against Chesapeake and Portsmouth schools and placed in the final competition for... read more