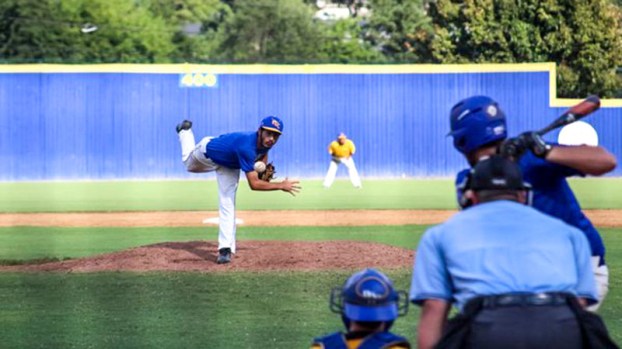 Mason Brown works on the mound for the Paul D. Camp Community College baseball team. PDCCC recently upset the No. 6 team in the country. (PDCCC Photo)

The Paul D. Camp Community College recently took on and upset the No. 6 team in the country.

The PDCCC baseball team has been coming along in its second season. PDCCC sits at 15-8 and has gotten some wins over some very good teams, with one of their more notable wins coming against Brunswick Community College. Brunswick was ranked No. 6 in the country at the time PDCCC faced them last weekend.

In a three-game series, PDCCC took two of them to win the series. It was a good win for the program and something Coach David Mitchell was excited to see his team accomplish.

“We have been playing well for the last couple of weeks,” Mitchell said. “We’ve had a couple of big wins, and we felt like the team was coming into their own.”

In the doubleheader last Saturday, PDCCC won both games. They finished the series Sunday, when Brunswick won its only game of the series.

Suffolk native and former Nansemond River High School standout Jarret Henderson was the winning pitcher of the first game. PDCCC took the win with a close score of 10-9.

“Jarret ended up getting that win on the mound for us, and we are really proud of him,” Mitchell said. “He started the season on the shelf for us because of an injury, and we eased him back in, and he’s done well for us.”

Mitchell saw the win as a big step for the program and was excited about what it can do for the team going forward.

“It was a huge series win against a top 10 opponent. It was huge for our school,” Mitchell said. “I am happy for our players and our coaches, because they have put in a lot of work. So I am happy we were able to achieve this.”

Not only did PDCCC get a top 10 win against Brunswick, but also it got a top 20 win a couple of weeks ago. In just two short years, PDCCC has shown it is building a formidable program with Hampton Roads talent.

“Guys are gaining confidence in themselves, and we are seeing their play take off,” Mitchell said. “Especially seeing guys from South Hampton Roads and Hampton Roads, in general, contributing to the success.”

Mitchell coached at Nansemond-Suffolk Academy before taking the job at PDCCC two seasons ago.

The Nansemond River High School baseball team picked up its second win against a Class 6 team with a win... read more