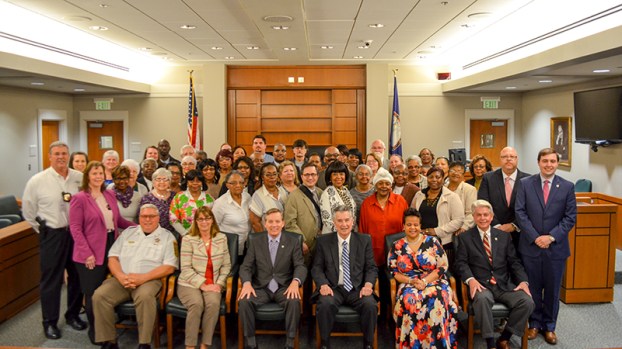 The speakers of the Suffolk Commonwealth’s Attorney’s Office Citizens Academy – plus other elected officials like Del. Chris Jones – and the citizen graduates for the program’s seventh year Thursday evening at the Godwin Courts Building on North Main Street.

The Suffolk Commonwealth’s Attorney’s Office graduated its largest class yet for its annual Citizens Academy on Thursday. Participants, academy speakers and other officials met Thursday evening at Godwin Courts Building on North Main Street to recognize the 66 participants for the program’s seventh year.

Each of the citizens at the courthouse received a certificate of completion for the four-week program, which were distributed by Commonwealth’s Attorney Phil Ferguson and Delegate Chris Jones. There was also a catered reception to go with the series of remarks that praised this year’s graduating class.

“It is our hope that you will go back into the community and share this wonderful knowledge and information with others,” Community Outreach Coordinator Joan Turner said to the Thursday evening assembly. “Thank you for your words of encouragement, participation, attendance, and for being the largest class so far for this academy.”

Participants were taught the day-to-day operations of the Commonwealth’s Attorney’s Office, along with the Clerk of the Circuit Court, Commissioner of the Revenue, Sheriff’s Office and Treasurer’s Office. The curriculum is altered each year based on feedback from the citizens.

They met at the courthouse on Tuesdays and Thursdays during the past four weeks to learn exactly how these officials carry out their responsibilities, and each speaker was very detailed and open about their respective roles.

“They were all asked to speak on their own time, and they did it from the heart,” Turner said. “I truly thank them from the bottom of my heart. Each of you did such a marvelous job and (each) particular speaking session was truly understandable and enjoyed by all.”

The participants ranged from children to grandparents. There were couples, mothers and daughters and a few deacons. It was a wide range of people from different backgrounds, and they were engaged at each session with questions of their own.

“You all each night were very focused, interested and you did ask a lot of very good questions,” Ferguson said. “That’s how you learn. Not only (with) what we present to you, but if there are things on your mind, you get an opportunity to ask what question may be on your mind, and that may be also what’s on somebody else’s mind.”

The purpose of the academy is for citizens to be better informed on how their government operates so that they’re able to hold their representatives accountable, be more active in their community and foster cooperation for positive changes.

“I think what Phil has done with this academy — with having the constitutional officers come in to speak — is help give you an understanding of how the city works, how government works,” Jones said. “I think when you as a citizen understand how government works, you can hold us more accountable (to) do our jobs that you elected us to do, and then to be a part of our community to make it a better place to live.”