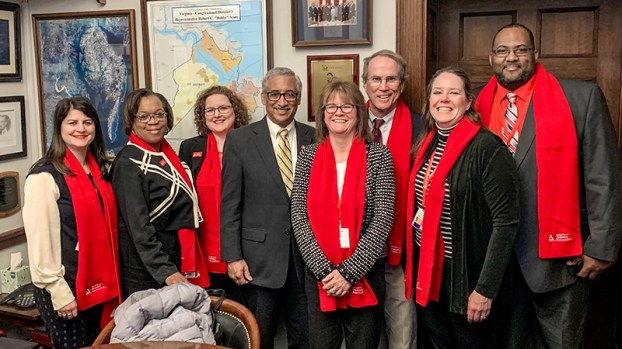 With roughly a month to go before the Hampton Roads Tour de Cure in Suffolk, advocates traveled to the nation’s capital to answer the Call to Congress organized by the American Diabetes Association.

The ADA convenes Call to Congress each spring to gather hundreds of advocates to Washington D.C. to educate Congress members on the impact of diabetes and urge them to assist approximately 30 million Americans that are living with diabetes.

Call to Congress was scheduled Wednesday to Friday this week, starting with a Wednesday meeting between the advocates to discuss the key federal priorities for their meetings in Congress. This included more federal funding for the National Institute of Diabetes and Digestive and Kidney Diseases, the National Diabetes Prevention Program and other diabetes support programs, according to Dr. Maggie Morris Fears, ADA advocate and community leadership board member.

Then they boarded their buses on Thursday and traveled to Capitol Hill to meet with representatives. Morris Fears and her fellow advocates met with Congressman Bobby Scott, the offices of Sens. Tim Kaine and Mark Warner, and others.

Morris Fears said each meeting was productive, and that each office was supportive of diabetes research and prevention, as well as addressing issues like the rising cost of insulin.

“All of them are on board to support efforts to bring the costs down and understand why the costs have gotten so out of hand so quickly,” she said in a phone interview Thursday evening.

These meetings gave representatives human perspectives on these issues, she said. They were able to listen to these advocates’ personal stories on their diabetes struggles. Some have been diabetic for decades, while others have family with the disease.

“Giving that perspective gives them a tangible story — rather than just ‘insulin is expensive’ — and helps them understand how it’s impacting their constituents,” she said.

But these three days in D.C. are just part of the ADA’s year-round engagement campaign to motivate the nation’s leaders to support and champion critical legislation for individuals that either have or are at risk for diabetes.

Morris Fears encouraged others to reach out to their representatives to keep insulin affordability and the need for more research dollars in public discourse. Every phone call and email provides another piece of evidence for representatives to show how this is affecting their constituents.

“The more noise we make, the more attention that’s drawn to the disease,” she said.