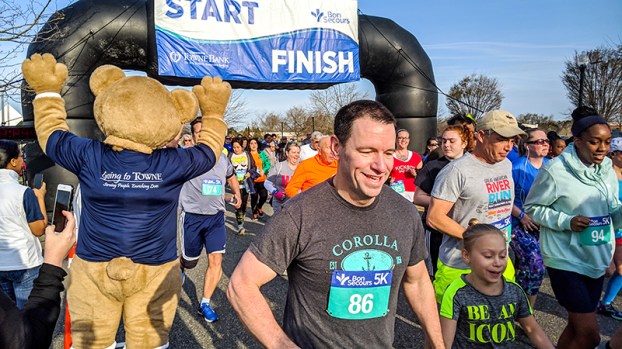 Runners, with John Austin of Suffolk in the foreground, begin the 5K portion of the Bon Secours Colon Cancer 5K and 1-Mile Walk Saturday. The run and walk, which began and ended at the Bon Secours Health Center at Harbour View, raised more than $20,000 that will be donated to the cancer funds for Bon Secours DePaul Health Foundation and Bon Secours Maryview Foundation to help provide care for colon cancer patients. In addition to event participants, more than 50 people volunteered, including eight Navy personnel from the USS Gerald R. Ford.

One group dressed up as Batman characters and another person rode the course on a unicycle, but people who came out to the Bon Secours Colon Cancer 5K and 1-Mile Walk Saturday were all there for the cause.

The run and walk, which began and ended at the Bon Secours Health Center at Harbour View and wound through Harbour View neighborhoods, raised more than $20,000 that will be donated to the cancer funds for Bon Secours DePaul Health Foundation and Bon Secours Maryview Foundation to help provide care for colon cancer patients.

For Valerie Clark, 55, of Newport News, as a colon cancer survivor, the event was personal. Two years ago, Clark, her husband, Ray Ferrara, 65, and her family all participated.

“Well, you’re never quite sure it’s not going to come back, the colon cancer, so for me, it’s just that reminder, it is the awareness and that’s what today’s all about,” Clark said. “It’s to raise awareness, and get people out there to be seen and get screened.”

At that race two years ago, Ferrara had a heart attack. Both he and Clark vowed to continue with the event, and others, as a means to stay healthy.

“I’m back at it (and) we’re going to stay healthy for the rest of our lives,” Ferrara said.

Paul Gaden, chief executive officer of Bon Secours DePaul Medical Center in Norfolk and Bon Secours Maryview Medical Center in Portsmouth, said the event is important to raise colon cancer awareness. In Suffolk, there were 43.6 cases per 100,000 people in the 2011 to 2015 measurement period, according to the National Cancer Institute. The American Cancer Society states that one in 22 men, and one in 24 women, will be diagnosed with colorectal cancer in their lifetime.

“We’re a hotbed here in the Hampton Roads market, unfortunately, for high rates of cancer incidence,” Gaden said. “So it’s just important that we’re out here and educating the community and raising funds and helping those that are in need.”

Kathy Costa, 67, of Western Branch, participated in the event to honor her sister-in-law, who is a colon cancer survivor, and her mother, who died of the disease.

“My mother died in the 1970s, so there’s been a lot positive research for cancer since then,” Costa said. “My sister-in-law, it’s (been) about seven years now. In that time frame, so much has happened, so it’s because of events like this that the American Cancer Society having so much exposure and research available so there are more and more success stories.”

Tim McDaniel, 30, who works with the event’s presenting sponsor, TowneBank, rode a unicycle over the 5K course and said he had no difficulty managing the course. He said having Crohn’s disease and irritable bowel syndrome makes the event important for him. With the weather clear and sunny during the morning, it made conditions ideal for running, walking and riding.

“I love the camaraderie, connecting with people, the cardio — it’s good on my knees,” McDaniel said. “It’s a challenge. It’s more intense than regular jogging, I feel.”

Maricarmen Korngiebel, 37, who works with Gastroenterology Associates of Tidewater in Chesapeake, dressed up as the Riddler and participated with a group who dressed up as Batman characters. This was her fifth year taking part.

“We need more events like these to actually just promote and let it be known that colon cancer is here, and it’s easy to be taken care of, it’s easy to be screened and things like this help promote that,” Korngiebel said.

Suffolk Police have arrested a Green Pines Motel employee based on allegations that he solicited a male juvenile for sexual... read more