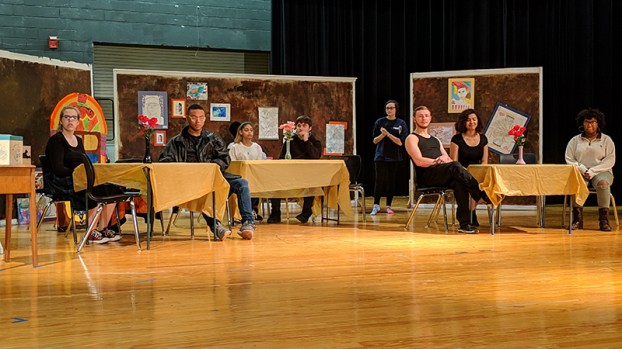 Students from Lakeland High School’s American Sign Language Club rehearse a scene from “The Dress Rehearsal,” which they will perform for the public at 6 p.m. Thursday and Friday in the school’s auditorium.

It was a rehearsal of “The Dress Rehearsal,” but unlike many pre-show practices, this one came with its own set of challenges.

For the Lakeland High School American Sign Language Club students taking part in the performances Thursday and Friday, mastering the sign language while also speaking lines presented issues unlike those in traditional productions.

Rather than just having to learn their lines, the Lakeland performers have also had to learn the sign language associated with them so that they can sign and speak at the same time.

Sophomore Rose Ayala, 16, said the timing of the sign language has been her biggest challenge.

“For me, it’s easier than if I was signing in the song, because since I’m doing dialogue, it’s all in pidgin, so the sign is exactly the same as the words,” Ayala said. “While if you’re signing a song, it has to be translated into American Sign Language grammar so you’ve got to think about it more.”

Ayala has a different challenge than most in the club, because she doesn’t take the class offered by ASL teacher Anita Fisher, who wrote the play and is the club’s advisor.

Junior Abigail Gallop, though, has her own challenge — playing Fisher herself. She does have a unique advantage, having known Fisher since she was 2. Gallop, now 17, said having to play Fisher goes counter to her personality, because she isn’t strict like her teacher. But she is sassy, she said, and that’s why she believes she was picked for the role.

“I know her on a deeper level, so it’s kind of easier too,” Gallop said.

Jacob Campbell, 18, is the lone senior in the production and will be performing in his third spring play and fifth overall.

“I love the energy,” Campbell said. “I love signing and giving back to the community and just putting on a display for everyone.”

He said he feels comfortable signing, having taken sign language class for three years. Campbell said he loves to dance around and be himself.

Sophomore Ashton Eller, 15, said knowing people who are deaf made him want to learn sign language so he could interact with them. He said he loves to be on stage and is comfortable with the sign language, though it was challenging to incorporate the movement on stage with the signing.

“It’s a lot harder to sign while also act at the same time,” Eller said. “And then, I have one speaking line, and for that one line, it’s hard to sign and then speak at the same time. It splits your mind. You sound like a robot and it’s finding out how to not sound that way.”

Though Fisher picked mostly songs from the 1960s, Campbell convinced her to include a different song, one from the 1980s. As his last performance, it’ll be a special show for a number of reasons.

“It’s special because I made Ms. Fisher include my song ‘Jump,’ (by Van Halen),” Campbell said. “I just love to jump.”

It didn’t matter that Fisher noted that the song’s meaning doesn’t refer to jumping, but rather, something else.

“So then I looked up all the words, and I went, ‘Do you know that that does not mean jump,” Fisher said. “It means, ‘Do you want to take a chance on dating me?’ He goes, ‘Really?’”

No matter. The song is in.

But rather than offer any more spoilers — other than there is some music, dancing and signing throughout the performance — the cast believes people will be entertained.

They also hope those in the audience learn something too.

“I just hope that they just get into it, that they see the kids actually doing what they love to do with the signs and the songs,” Fisher said, “and that they will just lose themselves in the play. We’re inviting them to dance with us the whole time, just to really get into it.

“And then at the end, I want them to say, ‘Wow, I never knew that sign was actually a language,’ because so many people think that sign is just beautiful, and they don’t realize that it’s an actual language.”