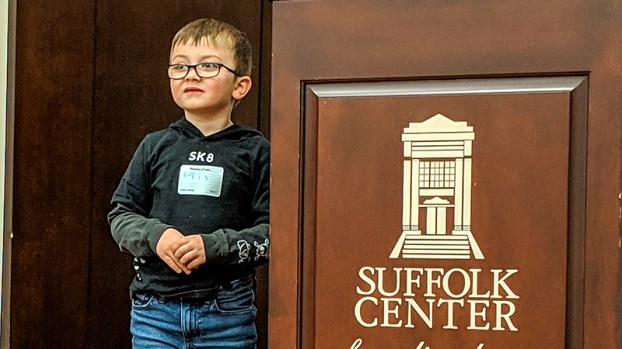 Korbin Vermette, a first-grade student at Oakland Elementary School, took part in the LEAP summer school program last summer and said his favorite part of it was reading.

The United Way of South Hampton Roads presented results of its summer programs during a Tuesday breakfast at the Suffolk Center for Cultural Arts, and it announced the launch of a new program to help schools in Suffolk meet the needs of individual students.

In the last five years, the United Way of South Hampton Roads has invested $5 million and has served 44,000 Suffolk residents, with 1,500 city infants and toddlers assessed for a developmental disability, and nearly 4,000 students taking part in summer school programs.

The summer school program has about 500 kindergarten through fifth-grade students in the LEAP program — Learning and Enrichment for Academic Progress — which began in 2015. Another 350-plus sixth- to eighth-grade middle school students, since July 2016, have taken part in the LAUNCH summer school program — Lead, Achieve, Unleash, Navigate, Create, Healthy, Lifestyle — which centers around a different theme each week.

That money will go toward student needs such as needing new glasses, shoes or other supplies.

“It gives them the ability to meet those needs immediately, rather than having to go through the bureaucracy of that,” Mohring said.

“We wanted our summer school program to be something kids want to come to,” Whitney said. “We’ve had summer school over the years, and no fault of anyone’s, it was more of a, students going as though it was something that they had to do, versus I want to do.”

Whitney said now, the school division has a waiting list at times because program slots are filled, and students are actively engaged in their learning and providing something of interest to them.

Carol McCormack, president and chief executive officer of United Way of South Hampton Roads, said it never intended to bring the summer LEAP program to Suffolk as quickly as it did. She credited Whitney’s interest in the program and the group he sent to Norfolk to see the program in action there, as well as the LEAP partners who contribute to it.

McCormack called on people in the audience to share the gifts of their organization to make the summer programs even better.

Whitney and United Way officials say that the program has worked out well. In a presentation at the breakfast, the United Way cited the following statistics for the summer LEAP program:

And for the summer LAUNCH program:

All students also have access to vision, hearing, dental and behavioral screenings and more services, according to the United Way.

“It really stands to support our mission as far as partnering with the community to prepare students to be successful in our society,” Whitney said. “We just feel like it has improved summer school programs while also just making certain that students are enjoying learning.”

Barbara Tidd, a summer LEAP principal, shared the story of Korbin Vermette, a first-grade student at Oakland Elementary School, who took part in the LEAP program last summer. After reading why Vermette’s mother liked the program for her son both academically and socially, Tidd asked Korbin what he liked about the program.

His favorite part of summer school?

And what did he learn?

“How to read more,” he said to applause.

One group dressed up as Batman characters and another person rode the course on a unicycle, but people who came... read more