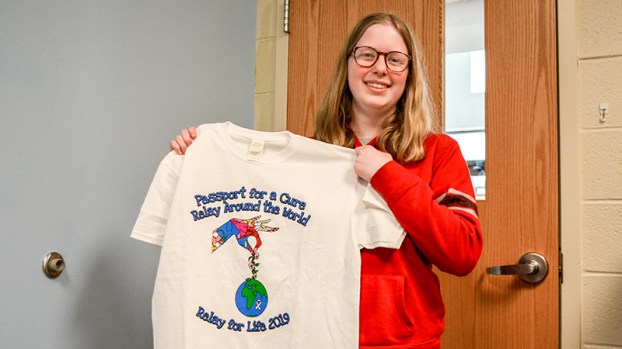 Zoe Robertson, a 14-year-old eighth-grader at Nansemond-Suffolk Academy, won the fifth annual contest to design the school’s Relay for Life of Suffolk T-shirt.

The shirt features Robertson’s colorful artwork on the front and the names of the school’s nine different fundraising teams on the back.

Upper and middle school students submitted their art, and the designs were voted on by each team captain along with team sponsors.

Artists were asked to embrace this year’s Relay theme of “Passport for a Cure — Relay around the World.”

“We asked them to use the theme ‘Passport for a Cure — Relay around the World,’ so we wanted them to use some concept of the world,” said the school’s College Counseling Coordinator Candy Nash. “We were really curious to see what they would come up with for that slogan.”

NSA has formed teams and raise money for Suffolk Relay for Life annually since 1998, and the event was held for years at the school’s campus. Nancy Freeman Russell, the former lower school headmaster who died in 1999, was instrumental in bringing the event to the school after she was diagnosed with cancer several years earlier.

Nash said the annual T-shirt design contest is a way for the students to support Relay while flexing their creativity.

“I just think this is another opportunity for the students to shine. I know in the past we’ve had juniors and seniors put this on their college resume, so this really is a big deal,” she said.

Zoe has been doing art for as long as she can remember. She’s often found sketching in school, and her room at home is covered in her various artworks, she said. She plans to study graphic art as a minor when she eventually goes to college.

Julie Heller, Zoe’s mom, even had her friend Caroline Kalmbacher of Western Branch reach out to her to see if Zoe could come up with a T-shirt to help her and her husband fundraise their adoption of children from India.

“Caroline saw Zoe’s drawing and was so impressed by her skills that she asked if Zoe would be willing to draw a design for a T-shirt for their fundraiser,” Heller wrote in an email.

Zoe’s originally made this contest-winning artwork for the Suffolk Sister Cities International Exhibit in the Suffolk Center for Cultural Arts. She drew flowers into the hand holding up the world by a string in the picture, and each flower represented a different country from around the world.

“All the countries come together to hold up the world, and if one country did fall, (then) the world would just shatter,” she said.

NSA middle school art teacher Elizabeth Dolan submitted Zoe’s artwork for the T-shirt contest, along those of her other students. Zoe said it was a nice surprise to find out that hers won out of all the other fantastic entries.

More than 150 T-shirts have been printed with her design, which features a white ribbon that she added to the image to tie it to Relay. These shirts will be worn at school when spirit week kicks off on Monday and on Relay day.

“My mom is going to be wearing it, too,” Zoe said. “She got them for the family.”

Relay for Life of Suffolk will be held on May 18 at Nansemond River High School, 3301 Nansemond Parkway.

Survivors and supporters alike will be engaged from noon to 10 p.m. with laps around the school track, fundraising activities held by different teams, live entertainment and food vendors.

Following the opening ceremony at noon there will be non-stop laps that will include survivor and caregiver laps, along with festive alternatives to keep people moving.

There will also be the lighting of the luminarias at 9 p.m. to remember those that have been lost to cancer. Bags are available for purchase online for $10 and on the day of the event as well. These will be personalized to honor loved ones and placed around the track for participants to walk among the candlelit memorials.

As of Wednesday evening, about $28,983 has been raised towards this year’s $150,000 goal, with 45 days to go. Visit relayforlife.org/suffolkva for upcoming deadlines and updates to the event’s schedule. Registration for the event is free.

Those interested in registering as a vendor or who have other questions can contact Tara Asare, community development manager for Relay for Life of Suffolk, by email at tara.asare@cancer.org or by calling 493-7972.

Sentara Healthcare announced on Tuesday that its Obici Hospital is undergoing a planned transition in leadership, with the retirement or... read more