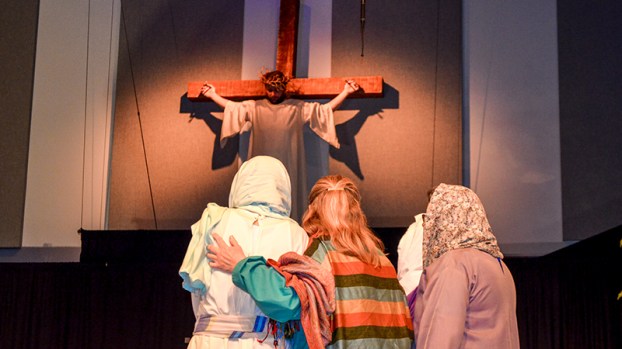 Mary, played by Tonya Deaton, and her friends look on as Mary’s son Jesus — played by Josh Butts — hangs from the cross.

Cast and crew members at Southside Baptist Church will reveal the next chapter of the story they told last Christmas for their Easter production that will deliver divine truth to audiences.

“Bread of Life” will be performed at the church on the evenings of April 13 and 14. This Easter drama is open to the public with no admission fee.

Director Ernie Chenault and his cast will return to the innkeeper’s family that sheltered Mary and Joseph in their Christmas production back in December. Audiences will see Erel, the innkeeper’s son, as a man who’s shown the true way amid the crucifixion and resurrection of Jesus.

Chenault said this was a unique way to tell the story of the resurrection, with characters that audiences were familiar with and a family dynamic that shows the divisive reactions to Christ’s teachings.

“When Jesus was born and had His ministry, it was a real conflict between the people who practiced Judaism — practiced being followers of Yahweh — and the man who was preaching that He was the redeemer,” he said.

But the truth is that He was the redeemer, Chenault said, and that truth plays out over the course of the production and in each character’s interpretation of Christ.

“Some get it and have a lot of faith and belief,” said Josh Butts, the actor playing Jesus. “Others are (in) that middle ground, and others think He’s just speaking madness. He’s sharing the word, the truth with them, ultimately in an effort to bring them closer to Him.”

Erel, Mary, Jesus and the others in this story will be fully realized on-stage in the 400-person auditorium.

The elaborate set pieces and striking, historical wardrobe that have elevated previous productions at Southside Baptist will once again be put to use by this dedicated cast and crew.

Butts said rehearsals have been going well with his castmates as they prepare to bring this Biblical story to life in an interesting, engaging way.

“On set with the cast, it’s a great time. It’s just a big family,” he said. “The difficult part for me is that I’m portraying my Lord and Savior. It’s the human element, trying to portray someone that is unportrayable, if you will.

Senior Pastor Fred Gray said “Bread of Life” will resonate with members of the community and their own spiritual journeys.

“I think it resonates because in this play there are real people on a real journey to find out the truth about Jesus Christ,” Gray said.

“Bread of Life” will be performed at 6 p.m. April 13 and 14 at Southside Baptist Church, 917 Carolina Road. Nursery will be provided for ages 36 months and younger. American Sign Language interpretation will be available on April 14.