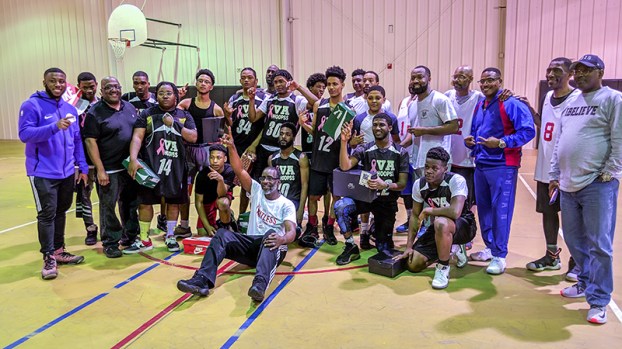 Suffolk pastors played basketball with students at Turlington Woods School, and then presented the students with sneakers following their game Friday.

The final score was irrelevant, but the purpose behind the basketball game between a group of Suffolk pastors and Turlington Woods School students Friday was not.

The pastors, led by Karl Wilkins of The Mount Suffolk, brought new sneakers to give to the students. But Wilkins hopes they get something greater out of the experience than playing a game, or even getting a new pair of shoes.

“I need you to display that kind of effort in the classroom,” Wilkins told the students, who won 52-49. “You see what we can do when we work together (as) a team. Nobody got down on nobody. You encouraged him, he encouraged you. We’ve got to do that in the classroom. Even when we are out in the community, encourage each other.”

Wilkins, who first began visiting the school about three months ago, said it was a feeling-out process between himself and the students at Turlington Woods. The school is the daytime alternative program for middle and high school students in Suffolk Public Schools who have been taken out of their assigned school for disciplinary reasons.

But as he got to know the students, Wilkins said their need of sneakers was a common thread.

“With me being a pastor, on my way walking out of the door, God spoke to me and told me He wanted me to start a sneaker drive,” Wilkins said. “Because if we were going to change the direction of the next generation of youth, it’s going to start with putting something on their feet.”

Wilkins, a barber for 31 years and a pastor for about a year, began reaching out to other men in the community asking them to buy sneakers for the Turlington students. He took the sneakers to church and had the intercessors pray over them and anoint them, and believe by faith that when the students put them on, God would order their steps.

As a weekly reward for the students’ good behavior, the pastors served lunch to them prior to the game, which was close throughout before the students scored a last-second bucket to secure the three-point win.

“A lot of these kids have never played basketball, rec ball, high school ball,” Wilkins said. “I figured it would be an opportunity for them to play a game on their turf.”

Wilkins said he wants to give back to the next generation of youth and believes he is called to them, and that’s why he said he’s been coming to Turlington. In his interactions with the Turlington students, he said he sees a lot of potential, but they need to tap into it.

School principal Kinsey Bynum said he appreciates the involvement of Wilkins and the other pastors.

“We love the involvement and having the community out in the school,” Bynum said. “I don’t have bad kids. I just have kids (who) have done something bad, and that’s in the kids. They also need to have fun while they’re here as well.”

“It’s a supportive thing, because Turlington gets a negative vibe. But it’s good to see the community come out and see these kids and interact with these kids, and show them how the kids really are.”

‘Honoring our past, creating hope for the future’

The Suffolk Commonwealth’s Attorney’s Office and its Victim/Witness Services program are inviting citizens to tie ribbons in recognition of Crime... read more