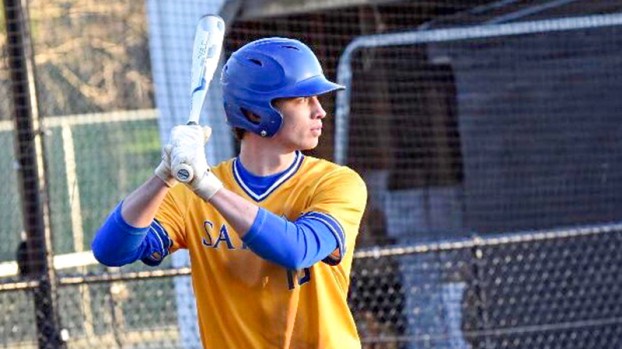 Seth Townsend was voted Suffolk News-Herald Player of the week after putting on a big performance in a win against Walsingham Academy. (submitted photo)

Seth Townsend was voted Suffolk News-Herald Player of the Week after putting on a big performance in a win against Walsingham Academy.

The senior Nansemond-Suffolk Academy baseball player had a strong performance in the win over Walsingham, going 4-for-5 with five RBIs and two home runs.

“That was definitely my most memorable game that I ever had as a Saint,” he said. “It was a good feeling to help my team secure a victory against a good team.”

Townsend, who has helped NSA to a 7-2-1 record and a top-five in the state rankings, told himself before the game to be aggressive at the plate and wanted to hit any fastball he saw. He did just that, helping NSA drive in 10 runs over the final two innings after the Saints had trailed 7-3.

Games like the one Townsend had against Walsingham motivate him. Helping his team win drives him. And his hardworking father inspires him.

“I just want to help my team win as many games as we can as well as enjoy the rest of the season with my teammates,” Townsend said. “We all push each other to be the best ball players we can be.”

Townsend keeps a close eye on professional baseball as a longtime Washington Nationals fan. A long-time National and now part of the Philadelphia Phillies, Bryce Harper is someone Townsend pays close attention to from an outfield perspective.

NSA is on track to have a very strong season in Joey Seal’s second season as coach. If seniors like Townsend continue to play the way they have, NSA could be in for some significant team success and accolades.

Late run for NR gives them the win

A late run in the final inning for Nansemond River gave it a 3-2 win over rival King’s Fork Thursday... read more