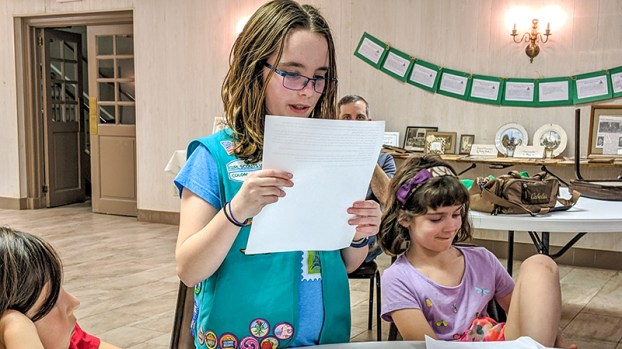 Virginia Hughes, 10, reads from the speech she prepared on adding recess time for elementary school students.

Girl Scout Junior Troop 357 may have appeared nervous practicing what they plan to tell the Suffolk School Board Thursday about why students need more recess.

But once they started speaking, it was clear they had done their research and had spent considerable time weighing what they want to say and how they want to say it. Several created illustrations to provide the board.

Kim Duncan, one of three Junior Troop leaders along with Joshua Hughes and Amy Marlins Ford, said the troop is working on a government badge and learning how to come to a consensus. Duncan said they all had to pick something they wanted to change, and they voted that having more recess time is important. They then invited School Board member Sherri Story to one of their meetings to share the pros and cons to adding 10 minutes of recess.

“They learned how to make a fact-based report based on their research,” Kim Duncan said.

Miriam Lesley, 10, she’s hoping that the Scouts will win the argument for more recess. Reading from her speech, Lesley said the kids should have more time playing with their friends, use up energy and get more exercise. She cited research that said kids think better, develop leadership and cooperation skills and help prevent bullying.

“We’re here to argue about 10 minutes of more recess,” Lesley said. “We’re trying to get 30 minutes of recess.”

Morgan Duncan, 10, said adding 10 minutes of recess would help with obesity and getting energy out of kids and keeping kids inside for recess does not improve test scores. She cited that information from the American Academy of Pediatrics and the Centers for Disease Control and Prevention.

Duncan said she doesn’t get fidgety, but other kids in her class do get that way and then misbehave. She said with a longer recess period, “we can figure out who we want to play with and what we want to play when we get out there instead of in class.”

“Usually we’ll talk in class, because we don’t get the recess,” Duncan said.

But not all agreed about adding recess time, and that’s OK with the troop leaders. The idea was to build consensus, which is a majority — but not unanimous — opinion.

Storey Grooms, 10, doesn’t want more recess, but she has helped work on the arguments in favor of it nonetheless.

“I don’t necessarily want it,” Grooms said. “I disagree with it, but one of the main priorities is it would get more exercise out of kids and improve class behavior.”

Members of the troop will speak during Thursday’s School Board meeting at Suffolk City Hall.

“We’re hoping that they agree and that we can earn the extra 10 minutes of time,” Kim Duncan said. “And if they don’t, we learn how to make an argument and how to ask for change with our government and our local officials.”

UPDATED 5:30 P.M.: All eastbound lanes of Holland Road are currently closed in the 6000 block following an overturned tractor-trailer.... read more