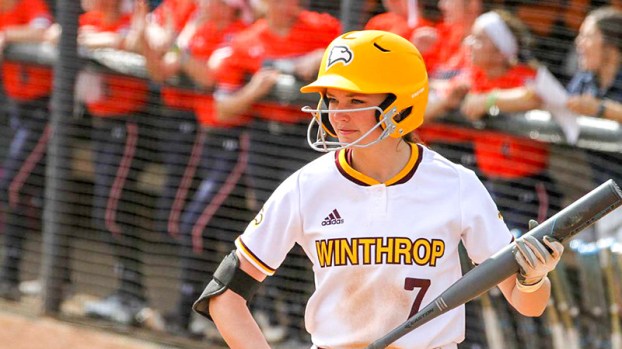 Lowers excited to play at home

Former Nansemond River High School softball standout Morgan Lowers will get a chance to return home and play in front of friends and family this weekend.

This weekend is shaping up to be a special weekend for the former Lady Warrior. Winthrop will head to Hampton to take on Hampton University in a Big-South Conference triple-header. With Hampton moving to the Big-South Conference last year, Lowers has the chance to play in Hampton Roads again during her senior season. She’s excited about the opportunity.

“It’s honestly a surreal feeling, with this being my senior year, to have this opportunity,” she said. “I’m excited to get to play in front of friends and family.”

Lowers is in the midst of a strong senior campaign. Last weekend, Winthrop faced off with conference foe Radford University in a double-header where Lowers set a career high for hits in a game with four. In two games, she went 5-9, which saw her move up the all-time hits list for Winthrop. The Suffolk native sits at 10th all-time with 191 career hits. She has hopes of possibly getting to No. 1 on the list before her season is over. She currently leads Winthrop in hits and runs this season with 46 and 29 respectively. She is second on the team with three home runs.

“I had no idea I was even that close,” Lowers said. “It’s amazing and humbling. I’m hoping to get to No. 1, but I’m just taking it one game and one bat and swing at a time.”

Even though Winthrop is in South Carolina, Lowers spends her summers back in South Hampton Roads. In fact, over the summer she interned at WAVY-TV 10, an experience she described as the best of her life. Because of that experience, she has set herself up for life after school as she is set to work as a news producer at a Charleston, S.C., news station.

For now, she just wants to make sure she has fun on the field while making the best of her final season.

At Nansemond River, Lowers was an All-Conference, All-Region and All-State performer for the softball team.

Lowers and Winthrop will square off against Hampton in a doubleheader Saturday at noon and 2 p.m. The third game will be played at 1 p.m. Sunday.