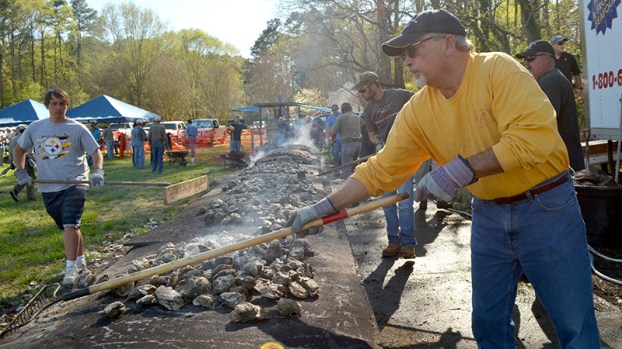 Hundreds gathered around rows of tables set up on the grass, with thick smoke coming from the grill and filling the air on Wednesday’s sunny afternoon.

The afternoon was filled with conversation, delicious-smelling food and seafood delivered by the wheelbarrow-full. The Chuckatuck Ruritan Club’s 43rd annual oyster roast made its return to the Rose Farm off Everets Road, and with it came both newcomers and roast regulars.

It was Patrick Grundler’s 12th year at the club’s annual roast, seventh for his friend Haywood James II and second for Grundler’s nephew Brandon Wood. Grundler said he enjoys the camaraderie of the event.

“Meeting new people, talking, laughing and having a good time,” he said.

Families and friends enjoyed cold refreshments from the beer truck as they chatted under clear skies. Hungry patrons shucked their oysters with gloved hands and added crackers, hot sauce, cocktail sauce and other flavor enhancers to the mix.

“It’s a great atmosphere (and) it has all the amenities you’d want,” said Clinton Turner, who was there with his brother, Elston Turner.

Along with the bounty of oyster bushels from Murray L. Nixon Fishery, of Edenton, N.C., was more than 100 gallons of the club’s signature clam chowder. The recipe was made decades ago by the late Jerry Saunders and Bill, and the sign on top of the clam chowder wagon on Wednesday read “Bill and Jerry’s ‘Secret Recipe.’”

Jerry’s son Jay Saunders, 36, was ladling out his father’s crowd-pleasing recipe to a steady influx of hungry patrons.

“It had become a tradition here at the oyster roast that Bill and Jerry would cook over here,” said George Fly of the Chuckatuck Ruritan Club. “Jay is a legacy. He comes up here where his dad was — but he helps out everywhere else, too.”

Fly said that this year’s roast was yet another successful fundraiser for the club, the proceeds for which go back into the community through the club’s support of local organizations like Boy and Girl Scouts of America, Meals on Wheels and Western Tidewater Free Clinic.

Fly thanked the Rose family for sharing their farm for the event once again, an event that Saunders described as both a good time and a good cause.

“It’s a big event for the community to come out, and it’s a good kickoff to the summer season,” Saunders said. “We’ve been lucky enough to have great weather today, and we hope everyone has a good time.”

Oysters were cooked on the grill near the clam chowder wagon and were loaded into wheelbarrows for volunteers to shovel onto the community tables, where everyone was getting to the meat of a good time.

Charlene and Max Justice sat across from their friends Patti and Steve Simons — another couple — and beside more in their group. They have been coming to the club’s oyster roast off and on for about a decade.

Charlene Justice said the oysters this year were “sensational” once again.

“It’s nice and hot, a little salty. Perfect,” she said as she shucked another one.

The group had their own recipes to go with the oysters. Charlene made a creamy Oysters Rockefeller topping with a mix of spinach, onions, cheese and a bit of garlic and white wine. Peggy Shannon made wonderful salmon dip, and Chuck Forrest was ready with fresh garlic and butter.

They were very, very experienced roasters.

“We come to here in the spring, and then in the fall we come to the (Crittenden, Eclipse and Hobson Ruritan Club oyster roast),” Max Justice said.

“And it’s always a beautiful day when we come here,” Charlene added.

Friends and family honored their loved ones on Thursday by tying ribbons to trees in the Godwin Courts Building courtyard... read more