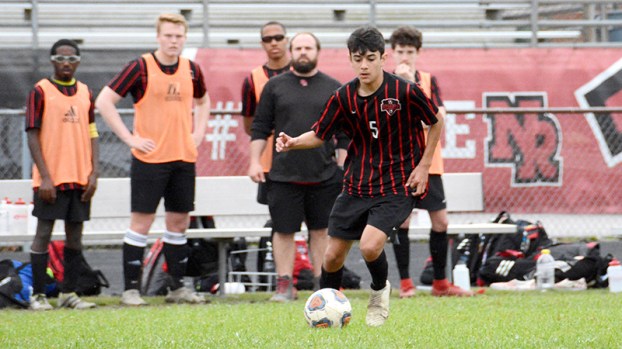 Ayden Chance looks to make a play for the Warriors. The Warriors will head down to South Carolina to compete in a tournament next week during spring break. (Melissa Glover photo)

The Nansemond River High School boys’ soccer team will head to South Carolina over spring break to compete against some out-of-state competition.

Some Suffolk Public School teams won’t be competing for at least a week because of spring break. However, the Warriors will play against some very good competition from North Carolina, South Carolina and Georgia. It is an opportunity the team was able to put together before the season, and Coach Dustin Tordoff and the team are excited about it.

“I had been looking for a tournament for us to play in for spring break, and I was able to find one finally,” Tordoff said. “I was able to hear some good things about the tournament we are playing from a coach in the district and heard good things. We were able to fundraise and do what we needed to do to make it happen.”

The trip will provide a good bonding experience for the team. Coach Mark Stuffel of the Warriors baseball team takes his team to South Carolina every spring break and shared some things about how it improved his team with Tordoff. The Warriors want to continue to strengthen the team’s bond, but they also want to go to compete at a high level.

“We are going to go down there to compete, but we know how important it can be for us building our team,” Tordoff said. “We are excited about that part.”

With the Warriors being the only school from Virginia competing in the tournament, they are excited about how things will shake out against other teams coming from different states.

Nansemond River is 4-0 on the season and feels good about where they are heading into the break. Because of the talent that graduated the last two years, a lot of questions surrounded how the Warriors were going to regroup. However, all of the players on the team have stepped up.

“We’d love to go down there and come back 7-0,” sophomore Taylor Jones said. “This will be a good opportunity for us to bring us closer together as a team.”

The Warriors will travel Sunday, with their first game being early Monday morning.